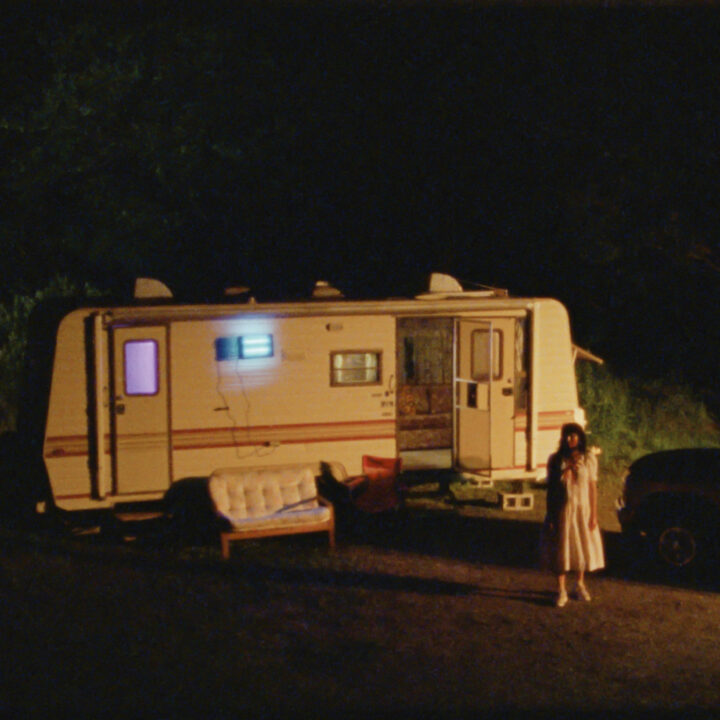 Boy Harsher’s latest release, THE RUNNER OST, is an exorcism.

Augustus Muller and Jae Matthews’ fifth release entitled THE RUNNER OST is not a traditional album. Rather, it is the soundtrack to a short film, also entitled THE RUNNER. The film, written, produced, and directed by the duo, is a searching horror film, attached to a metastyle “documentary” about Boy Harsher’s recording process. The album includes several distinct components: cinematic arrangements, vocal features, and of course classic Boy Harsher dark pop. Both the album and short film will be released in January 2022.

Last year, in the midst of the obvious chaos (the global pandemic), but additionally with Jae’s MS diagnosis, Augustus started working on moody, cinematic sketches. It was uncertain what these pieces would become, other than catharsis. They were unable to tour, a drastic (and isolating) shift in their career, and making ‘club music’ did not feel right. But there was so much they needed to get out. In Jae’s period of convalescence, she kept thinking about this sinister character: a woman running through the woods. Together, they developed this idea further into a film. The next Boy Harsher release would be a reconciliation of this time made into moving image. The album processes feelings of universal anxiety and the confrontation of at home illness. A necessary expulsion during a time of unrest.

The album opens with “Tower”. The only track on THE RUNNER OST that Boy Harsher has previously played live, but never recorded. The song is an incantation, with its pulsing synth and Jae’s begging vocals. A spell about desire and impending destruction. Jae asks 'But are you honest ? Do you trust ? You trust in me ?' Questions answered by her desperate yells. It starts both the film and the soundtrack with a heavy presence.

- Mariana Saldaña of Boan and Cooper B. Handy of Lucy. Muller allows a distinct sound for both vocalists and leans into divergent sounds and genres for both songs respectively. “Machina”, is a HI-NRG homage, performed by Mariana Saldaña, sung in both Spanish and English. “Autonomy” a new wave tribute, performed by Cooper B. Handy of Lucy. In a way, Augustus Muller embraces the soundtrack ethos, by including tracks that feel like they are from different musical groups.

“Machina”, a cheeky uptempo HI-NRG song, is playful as well as cautionary. Saldaña describes a cold, sterile entity, the Machine, that is soulless and without a heartbeat. 'I can’t spend tonight with you, I can’t dance with you, I can’t end my night with you, I can’t feel your heart beat too' - the cryptic message repeats throughout the song. The implication is that contemporary obsession with the “Machina” is a lonely reality. The song is dark and intentionally witty: who are you going to dance with, when the machine is your only companion? Muller marks his time spent into Mexico City, at the renowned dance club Patrick Miller, as a major inspiration. “Machina” blends the bright cheery palette of HI-NRG and Italo with Boy Harsher’s more shadowy aesthetic. “Machina” was recorded and mixed at Infinite Power Studios, by Matia Simovich.

“Autonomy”, which features vocals by Cooper B. Handy, engages a similar theme, but with a humane point of view. The ‘autonomy’ of being human is complex due to emotional engagement, independence is lonely, but attachment is baggage. Handy sings in his breathy, rushed way: 'Memory’s a blessing in a safe mind, feels lucky somebody could replace mine. I know these things take time, I can see the angels marching in a straight line.' As if the prospect of death (or heaven) is the penultimate experience of being human. Muller and Handy, considered collaborating as both musicians reside in Northampton. However, it was not until the pandemic pause that the two could get together to create.

Jae Matthews provides the vocals on the rest of the tracks on THE RUNNER OST. Beginning with “Gimme a Reason”, a pop-infused track that is very Boy Harsher in its sounds and vocal character. “Gimme a Reason” is the first song Matthews and Muller worked on together for the album, a thematic return to Boy Harsher’s beginnings. The song plays with lustful feelings of needing to be wanted, craved. Matthews solicits the listener - 'Gimme a reason to wonder why. When you call, will you call my name ?' The looping synthesizer wraps around Matthews’ voice, creating a luscious void that one could easily fall into … an intentional motive for the A side of the record.

Muller and Matthews also use this album as a means to break free from their sonic tendencies. The duo plays with structure in “Escape”, by shifting the baseline midday through the song. The track begins with the fantasy 'Maybe, we can escape ?' Yet delves into a new reality during the tonal switch, Matthews declares:'What’s done is done, my old friend.' Matthews sings with a strange, confident air - no longer the desperation of fantasy, but the acceptance of the end. In “I Understand”, a short, pensive song, Muller uses stark instrumentals to match Matthews’ heartbreak. The song feels more like a letter, or a voicemail, the kind you write after its all said and done. If “Escape” is the beginning of the end, “I Understand” is the acceptance of the denouement, which appropriately ends the album.

“The Ride Home” and “Untitled (Piano)” are two score tracks on THE RUNNER OST. Muller has been expanding his credentials as a composer, most notably for several Four Chamber’s films released over the past two years. As in those pieces, these songs showcase Muller’s prowess as a sonic storyteller. Despite the practical intention within the film, both songs function standalone with their own cinematic and musical merit. Married to the scenes in the film, they provide emotional context and dense Boy Harsher atmosphere.

Recorded at their home in Northampton, MA, Boy Harsher developed this THE RUNNER OST from 2019 into 2020. Long time collaborator and friend, Jordan Romero joined them in Massachusetts for several days to produce the album. Final mixes were completed by Icio Baggio, out of La Distillera in Bassano, Italy. THE RUNNER OST is exactly what’s in the name: a soundtrack. At first the shape of the release was nebulous - yet once realized the album is dynamic. It serves as the story of the running figure and her musical accompaniment. Those expecting a traditional release will be surprised, but not disappointed