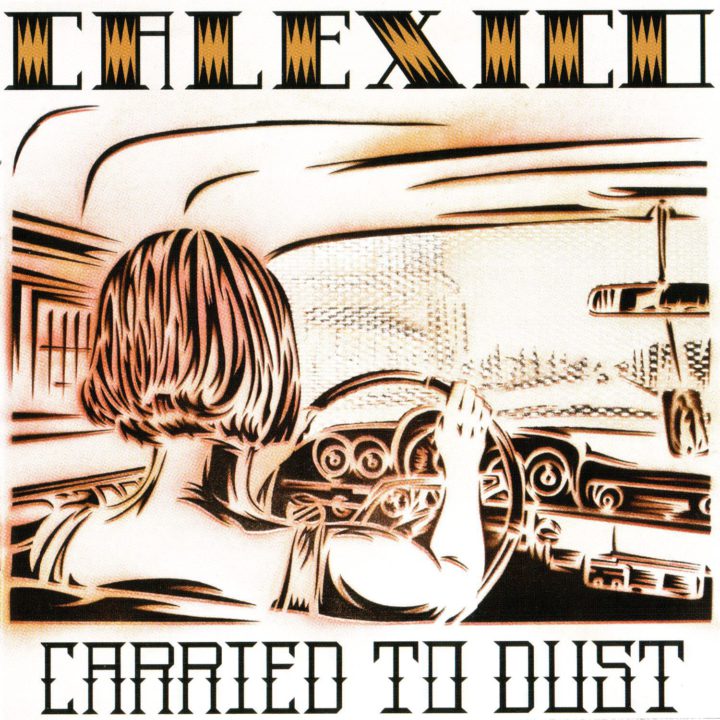 “CARRIED TO DUST is, at least partially, the story of a writer in Los Angeles around the time of the writers’ strike we had a while back in late 2007,” CALEXICO’s Joey Burns explains. “Our hopper heads out east on a whim and a dry Santa Ana tail wind. Stopping at the Yucca Valley swap meet he buys an old road map with a route already marked with red pen. It leads him to a cabin, and from the cabin to a chain of other small town thrift stores, picking up old copies of National Geographic magazines along the way.

Stories about snow drops in Moscow, leaning houses in Valparaiso, abandoned neighborhoods in New Orleans, and a manmade lake full of cell phone trees creep their way into his notes. He finds further inpiración at old roadside diners, bending an ear to each waitress and the local news over badly brewed coffee. The break proves to be enlightening. He falls in love with the newly found space and being carried along spontaneity's spark.”

There’s always been intrigue and adventure at the heart of CALEXICO. Ever since they were a largely instrumental duo experimenting with their unique collection of instruments and soundtrack sensibilities, Joey Burns and John Convertino have constantly imbued their music with an unparalleled sense of drama, calling upon the myths and iconography of the American West and its Spanish speaking neighbour Mexico, equal parts Sergio Leone, Larry McMurtry, Carlos Fuentes and Cormac McCarthy. Naming themselves after a town near the Californian / Mexican border in honour of this cultural mélange, they’ve spent the eighteen years since they met in Los Angeles mapping out musical territory that had otherwise been neglected or at the very least considered the preserve of historians. Now, with CARRIED TO DUST, they have defined that sound, calling upon almost two decades of exploration and an ensemble of musicians that must surely be the envy of bands throughout the world. CARRIED TO DUST represents the pinnacle of their achievement, a thrilling and moving journey through a landscape that draws upon the modern world as much as it does the decayed reminders of times past, stumbling upon unexpected delights whilst always moving forward with a pioneering sense of purpose. It presents a vivid picture of a world in which listeners can immerse themselves much as one is caught up in the tangled narrative of a Steinbeck novel or the imagery of a John Ford film, and confirms CALEXICO as one of the great American bands of the 21st Century.

CALEXICO’s music has always mirrored Burns and Convertino’s penchant for new experiences. From their intimate beginnings on Spoke, their dusty but highly evocative debut album, they’ve never shied away from embracing whatever inspires them. As their horizons have expanded, through both their relentless touring schedule and growing reputation, they have been able to call upon a growing community of collaborators and an ever-increasing familiarity with music from around the world, integrating both seamlessly into their idiosyncratic sound.

Known for their ability to adapt to working with other musicians – from Nancy Sinatra to Neko Case– the cast on CARRIED TO DUST includes Sam Beam, who appears on ‘House Of Valparaiso’, a furthering of their work together on Iron And Wine’s breakthrough release In the Reins. Tortoise/Brokeback mainstay Douglas McCombs contributes to the ghostly sounds of album closer ‘Contention City’, and Canadian chanteuse Pieta Brown lends her plaintive charms to ‘Slowness’, “one of the album’s few love songs”, Burns admits. Amparo Sanchez (of Amparanoia, whose solo debut was recently recorded in Tucson with CALEXICO and who appeared on fourth album Garden Ruin) guests on ‘Inpiración’, while Jairo Zavala – another acclaimed Spanish artist to benefit from CALEXICO’s production and playing skills on his forthcoming album – contributes to a number of tracks, including the upbeat opener ‘Victor Jara’s Hands’. Meanwhile, on ‘Bend To The Road’, Mickey Raphael – who CALEXICO met while working on the soundtrack to the acclaimed Bob Dylan biopic I’m Not There – shows why his understated harmonica skills have not only earned him a place in Willie Nelson’s band since the mid 1970s, but have also seen him work with the likes of U2, Emmy Lou Harris and Neil Young.

“The collaborative side to what we do is probably most recognizable on this album,” Burns states proudly. “Over the years we’ve played on many people’s albums and done remixes for groups like Goldfrapp , Gotan Project and Arcade Fire. I had this idea to do a straight up band album with all our members and then next, record an album where we back up a bunch of guests we’ve worked with in the past or who we’d always want to work with. The more I mentioned this idea, the easier it seemed to ask friends to sit in on current songs. All these distinctly different parts work in their own way highlighting the many aspects of our sound and feel. Whether from Barcelona or Berlin, or Austin or Iowa City, there is a thread that flows through our music.”

Of course CALEXICO these days is a band, something that became most apparent on their 2006 album Garden Ruin, when Burns and Convertino were joined by regular cohorts pedal steel player Paul Niehaus, Volker Zander (bass, upright bass) and multi-instrumentalists Martin Wenk and Jacob Valenzuela (who also takes lead vocal for the first time on ‘Inspiración’ alongside Amparo Sanchez) for the writing and recording sessions. “We knew we wanted to embrace some sweeping changes,” Burns recalls, “and we wanted to experiment more with mixing in a different studio with a producer. We even asked a different artist to help with the artwork. There will always be that desire to move forward with this band. We rarely seek to repeat or return to formula.”

CARRIED TO DUST sees them build on that experience, but – inevitably – refuse to replicate it. “After trying that,” Burns continues, “John and I preferred the more stripped down approach, adding each musician and band member at a time. They all bring creative ideas to the table, but there is a definite direction and aesthetic that John and I oversee throughout the whole process.”

“I think trying to keep the whole band around during the entire making of Garden Ruin slowed things down quite a bit,” Convertino elaborates. “We most assuredly had great moments of fun doing that, but I think this time we wanted to have that initial two piece set up that allows for these open ended rhythm tracks, tracks that can later be messed around with, band members and guests alike having loads of fun all over the top. It seems like this record had that kind of humble beginning, just two guys sitting down to play some music. It translates more to the individual.”

The experience clearly invigorated them. Working in the familiar environment of Wavelab Studios in their hometown of Tucson after their longest break from touring, Calexico returned to more familiar creative methods, while at the same time refining the band’s sound and the quality of the recording. They also recorded with Nick Luca, a long term on-and-off collaborator with a studio in the same building. “He is amazing,” Burns declares. “He has this ability to get inside our music. He plays with us live quite a bit in the States and brings this knowledge into the studio.” Garden Ruin sought to be a ‘big’ record, in keeping with the vast crowds that Calexico were by now playing to, but CARRIED TO DUST seeks to address each individual in their audience by allowing the natural creaks and echoes to be a feature of the band once again. The final album is arguably CALEXICO’s best recorded to date, one that reaches beyond their lo-fi roots without sacrificing any of the detail that has made them such a unique band.

As well as shaking up their studio approach, the album reflects Burns’ continually developing skills as a lyricist. Considerably more impressionistic than Garden Ruin, which reflected their fury and frustration at the Bush regime, CARRIED TO DUST “stems more from a traveller’s journal than a work book,” Burns confirms, suggesting that the record is “more inward looking, fractured and abstract”. Having said that, the band spend huge amounts of time touring, the many countries they have visited also providing inspiration. ‘Victor Jara’s Hands’ illustrates this most clearly: Jara was a Chilean theatre director, singer songwriter and political activist who was arrested, tortured and ultimately murdered following the 1973 US-endorsed Chilean coup. “We met some memorable people when we toured Argentina and Chile and they turned us on to a lot of unknown music back home, including Victor Jara. His story resonates with a lot of what is going on today – Guantanamo Bay, Abu Ghraib – and stood out strong and tall. Furthermore, some of the younger people we met in Chile were brought up in families living in exile during the 70’s and 80’s. Their story worked its way into the song ‘House Of Valparaiso’.”

One of CARRIED TO DUST’s defining moments is penultimate track ‘Red Blooms’, a song that emphasises the way that CALEXICO remain as creatively restless as ever. Over Convertino’s typically dry, rolling drums and the band’s ghostly arrangements, Burns whispers a tale of “blackened frostbitten nights… statues cloaked in white… and shadows drinking antifreeze beneath the underpass.” If the themes seem familiar to those who have followed CALEXICO since their start – Burns has written of poverty and abandonment on a number of occasions – the song serves as a stark reminder that CALEXICO continue to reserve the right to surprise their audience: the song talks of a place “crossed out on city maps, Prospekt Mira”, revealing that our Los Angeles writer’s map has taken us all the way to Moscow. It is one of the many unexpected moments that litter CARRIED TO DUST much as the ghost of tumbleweed figured so largely in their early recordings, and stands as confirmation that CALEXICO’s muse remains as magical and inventive as always. “Spontaneity’s spark” carries them ever further...