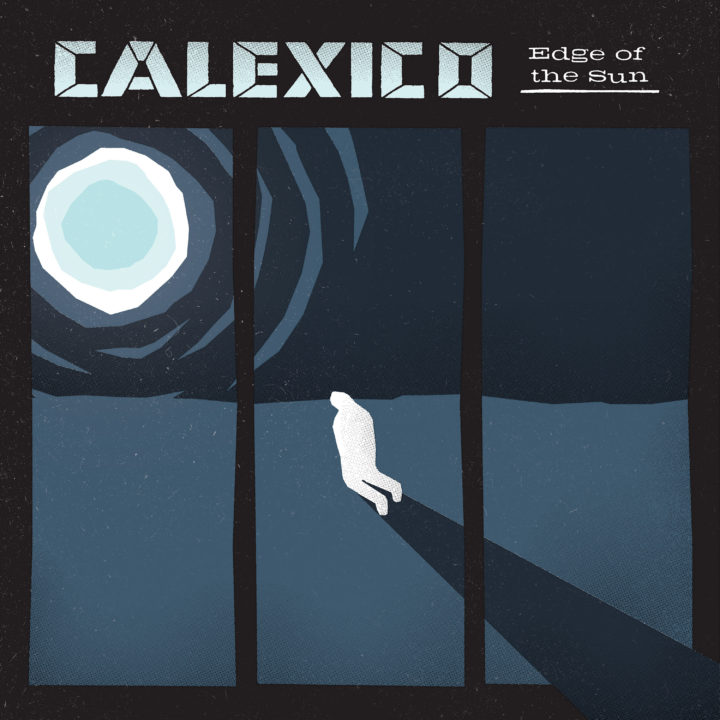 Calexico Edge Of The Sun

Calexico is no stranger to negotiating borders. For the better part of two decades, eight albums, and countless trips around the globe, Joey Burns and John Convertino have crossed musical barriers with their band, embracing a multitude of diverse styles, variety in instrumentation, and well-cultivated signature sounds. Under fences it digs and over mountains it climbs, sometimes into untrodden terrain, sometimes towards a more familiar landscape, and sometimes simply walking that fine line to soak up sustenance from all sides. These are men from the desert, yes, but there has always been so much more to Calexico than just heritage and heat. Now, with Edge of the Sun, Burns and Convertino find themselves straddling that celestial division of light and dark, taking inspiration from a trip to a place surpris-ingly unexplored by the band before, and with the benefit of many friends and com-rades to help guide the way.

“When I step back from this record I see the spirit of collaboration,” says Burns. “As we began working on it, we started inviting people and it was a natural thing. We’ve always welcomed guests; it’s in our DNA. John and I are really good at hopping in to play with people and improvise but we’re also sensitive to what artists need.”

“We’ve collaborated a lot in the past on other records but this one is the most vastly collaborative,” says Convertino. “Almost every song has a different guest.”

The first outside invitation came when Burns was writing “Bullets and Rocks” and recognized space for a former Calexico collaborator to join. “When putting vocals on that song, it immediately reminded me of the Iron & Wine feel,” says Burns. “So I texted Sam (Beam), who wrote back quickly and got it going.” Encouraged by that experience, the guest list grew to include musicians from a myriad of backgrounds, origins, and genres, including Ben Bridwell from Band of Horses, Nick Urata from Devotchka, Carla Morrison, Gaby Moreno, Amparo Sanchez, multi-instrumentalists from the Greek band Takim, as well as Neko Case. Burns’ older brother John Burns lent a hand to some lyrics and songwriting, and the band’s keyboardist, Sergio Men-doza, stepped up to co-write and arrange certain songs, ultimately co-producing the album along with Burns, Convertino, and longtime associate Craig Schumacher. It was, in fact, at Mendoza’s suggestion that Calexico would physically cross an actual border for a retreat to the historic Mexico City borough of Coyoacán to begin the writing process for Edge of the Sun.

In view of the fresh creative perspective provided by the band’s journey to New Orleans to make its previous album, Algiers, Burns sought Mendoza’s involvement in finding a new writing destination. “I wanted to see the band revisit elements in the songwriting that led to songs from [the band’s 1998 breakthrough album] The Black Light, so I suggested going to Mexico City,” says Mendoza. “To me, it wasn't going back to something they had already done, but rather adding another chapter with Mexican collaborators. The surroundings of Coyoacán really helped bring life to those ideas that were waiting for a special time and place to come out.”

“Going to another city to jumpstart the creative writing process helped us to know what this record is about and where we are as a band, like an open canvas with few ties to normal routines when recording and writing,” says Burns. “Of course, we have been influenced by Mexican music and culture since the beginning, and you would imagine that a trip to Mexico City would have happened on past projects, but it hadn’t. So going to the center of Mexico and seeing an artistic community with such an impressive history as well as notable current musicians really inspired us.”

The ten days in Coyoacán were not without their surprises. Initially expecting for the world of Calexico to mesh with the sounds and vibe of Mexico City and take on varied overt Latin influences, Burns and Convertino were amazed when they left the country with some of their poppiest songs to date. Album opener “Falling from the Sky” is earnestly straightforward in its rafter-reaching approach, and “When the Angels Play,” with additional vocals and lyrics by Pieta Brown, connects thematically to the Aztecs but, in Burns’ words, could have been written anywhere.

Perspective achieved, the band internalized the influence of Mexico and continued to write and record in their home Wavelab studio in Tucson throughout the middle half of 2014. Songs such as the electronica “Cumbia de Donde” and the cinematic swell of “Coyoacán” were direct results of the foreign experience and the type of lessons that can only be realized upon reflection. While Convertino’s move to El Paso, Texas, presented another slight border to cross, all this distance only served to inspire and preserve the unique Calexico identity: unconventional timing and in-strumental elements, an electrifying live show, and the pushing forward of social connection and ideas to create a profound space.

“It really demonstrates the dynamics of our live show, and I’m hoping this album helps translates some of that energy,” says Burns, identifying Edge of the Sun most closely to the wide-ranging styles of their 2003 album Feast of Wire. “We weren’t trying to replicate anything or make it hugely different from song to song, but there is some of that carryover, I think. As much as we try to break new ground on re-cords, inevitably there’s continuity, which works well on a record like this.”

Convertino, too, singles out Feast of Wire as a touchstone for the new album and a special era for Calexico, one that informed the band’s unique relationship with space and distance today. “Feast of Wire opened the door for us and attached our sound to the region, helping us discover that we could have that sound and still be our own thing,” he says.  “Joey and I have talked a lot about space in music; we make sure to give the notes we don’t play as much emphasis as the notes we do play, because they’re just as important. It’s a big part of what Calexico does: we create a space.”

Negotiating borders and the spaces within, then inviting others inside those edges: that may be the recipe for Calexico’s success.   As its empire expands and the famil-iar pieces join with fresh ideas and a new cohort to pass under wires and across fields and time, Calexico now finds itself here in 2015 on the solar precipice, navi-gating the edge and trying to find hope in that balance of darkness and light.

“The ‘edge of the sun’ could be coming from the direction of darkness seeking light, or riding the line between both,” says Burns. “Which side of this edge are you on? Traversing along the edge of the sun, that to me feels closest to what this album is and what the band has been, and where we are with this international makeup of musicians. Madrid, Nashville, Tucson, El Paso, Berlin; it’s an eclectic mix.  All in all, this album is about pushing through the blue to brighter days. Calexico has always had that element of hope, going back and forth between a positive outlook and em-bracing desperate or dark themes that I think we all share.”