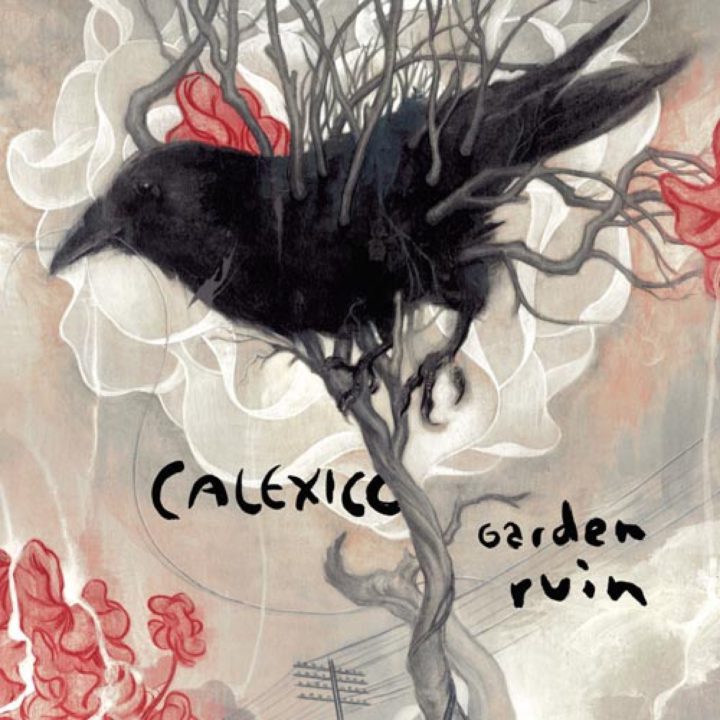 Fans of Calexico have already come to expect the unexpected from Tucson, Arizona residents Joey Burns and John Convertino. Each of their albums, from their dusty, lo-fi debut Spoke (1996) to the noir-infused dramatic power of The Black Light (1998), the breakthrough, mariachi madness of Hot Rail (2000), to their hugely successful most recent album, Feast of Wire (2003), which flirted with ambient electronica and Gil Evans infused jazz, charting in 14 European countries.

In 2006 comes Garden Ruin, officially the band’s fifth album, apart from their many tour-only CDs. Written in Bisbee, AZ. Recorded in Tucson, AZ. Mixed in Brooklyn. Mastered in California. It sees a new, and surprising episode unfolding in the Calexico story.

A little catch-up: In early 2004, Calexico brought out a live DVD, taken from a stellar performance at the Barbican in London, while the past couple of years has seen the duo contributing songs and collaborating with Nancy Sinatra, Laura Cantrell, Neko Case on her forthcoming album for Anti, Gotan Project’s new album, wrote the music to Marianne Dissard’s French lyrics for her new album (Marianne previously sang on Hot Rail’s ‘The Battle of Cable Hogue’). John released a solo album, Ragland, while sundry other Calexico dalliances include appearing as the bar band in the Michael Mann film Collateral (starring Tom Cruise), performing at the Sundance Film Festival in 2005, and perhaps most significantly, completing the In The Reins album with Iron & Wine’s Sam Beam, which saw the two groups pair up and tour the US throughout the latter half of 2005 (alongside the likes of James Mercer from The Shins & M Ward). Calexico also snuck in tours to Australia, NZ and Japan at long last, amongst their usual heavy European and North American commitments.

Naturally, Garden Ruin is informed by all these recent developments. As John Convertino says, “A band has got to keep changing and moving or it will get boring and break up.” While Joey and John remain at its heart, the multinational touring band they have gathered around them – Tucson’s Jacob Valenzuela, Germans Martin Wenk and Volker Zander, and former Lambchop pedal steel player Paul Niehaus – are much more involved in the studio on this album. Calexico’s influences have traditionally come from sources as diverse as Portuguese Fado, 50’s jazz, Gypsy or Romany music and its offshoots, 60’s surf and twang - from Link Wray to Duane Eddy - to the spaghetti western epics of Ennio Morricone, but this time, they were heading somewhere else.

“This album was a conscious decision to try something new and tap into strains in our musical fabric that haven't been highlighted in the past,” Burns says. “Touring with bands like Wilco and Iron & Wine had some influence, but everyone was trying new instruments or techniques. Backup vocals became more a focus than trumpets or strings, I was just concentrating more on the songs and singing – songs that didn’t necessarily go back to the same pool of influences as before. There are no instrumentals, and I wound up playing more in major keys, and there are more pop elements. And a bit more rock, too. John kept encouraging us to experiment, or diverge from set lists or musical habits on tour.”

For the first time, Calexico worked with producer, JD Foster. Foster had got to know the band on recordings they had done with Richard Buckner, Nancy Sinatra and Laura Cantrell, and had previously produced albums for Marc Ribot and Richmond Fontaine. “We liked the variety in his work,” Burns explains. “His choices for production have been focused on songs and are at the same time very adventurous in details – using unusual percussion, or wanting to bring in instruments like banjo ukeleles, bass melodica, electric mandolin, and tenor guitar.”

To start the process, they met for a week of rehearsals in Bisbee, a Victorian mining town in southeast Arizona, now a stronghold for left wing liberals, artists, writers, touring circus acts, and people who prefer the more creative lifestyle of a small town rather than the big modern cities of Tucson and Phoenix. “Plus,” Burns notes, “it's always 10 degrees cooler in Bisbee than in Tucson.”

“Our friend Bill Carter, a writer, film maker and photographer, he recommend we practise on an empty fourth floor flat above his friend's restaurant, Cafe Roka,” he continues. “It proved to be inspiring on many levels. Great food, everything within walking distance, down to earth people, and no working cell phones, since the old town is barricaded inside a deep ravine. Every day we’d walk through the narrow steep streets, like a smaller version of San Francisco, get some coffee, and head on up to Cafe Roka. It truly is an amazing place, perfect for making music or hanging out in thrift stores and haunted hotel saloons, both of which the town has a healthy supply.”

Lyrically, Garden Ruin sees Burns addressing contemporary America rather than the mythical Americas that were his source in the past.

“In the past there were songs that brought up social political issues like ‘Service and Repair’, ‘Sanchez’, ‘Sunken Waltz’ and ‘Across The Wire’, but never has an album been so concentrated on these themes as this album. I would say we are confronting these times of political extremism on songs like ‘All Systems Red’ and ‘Deep Down’,” Joey declares. “‘Letter to Bowie Knife’ talks about religious fundamentalism and ‘Cruel’ reflects on environmental corruption.”

“I think we are trying to do what we can in the music and lyrics to help people relate to the sense of frustration that’s so prevalent,” John agrees. “I don't think we have ever had such ‘political’ thoughts going through our brains in the process of making a record as we have had with this one. There are monsters lurking all over it, even in the pretty bits.”

But equally important is the more personal note that Joey brings to, interestingly, the albums gorgeous, harmony-laden pop numbers – the melancholy pop of ‘Lucky Dime’ with its “bup-bup-bup-bup aahhh” back ups, the breezy but yearning ‘Bisbee Blue’ and the laments of regret, ‘Yours & Mine’, and ‘Smash’. He even brings an intimate, lover’s whisper to the all-French lyrics to ‘Nom De Plume’ – nevermind that it’s a fearsome tale of decay and catastrophe.

Closing track ‘All Systems Red’ is the most marked musical detour – a massive 11 minute crescendo, with guitars surging round Burns as he howls, “I wanna tear it all down/and build it up again”.

“It was fun to bust out the guitars and get Paul, Martin and myself plugged in with pedals buzzing, feedback swirling,” Burns laughs, at last admitting the hidden rock monster within. “I guess it shows more during live shows. So why not try it here... in the peaceful and quiet studio. Ha!“

“I've been channelling Charlie Watts while Joey channels Mike Watt,” Convertino smiles. “I’ve finally come back around to enjoying a simple rock beat, while praying for some roll in there as well.”

Given Convertino’s distinctive drumming style, there’s plenty of roll alongside this new rock. ‘Smash’ picks up where Feast Of Wire left off: a simple, delicately arranged tune with feedback drifting through like smoke, Burns’ gentle vocal offset by Convertino’s perfectly balanced brushstrokes. ‘Roka’ – with its sultry guest vocal from Barcelona based Amparo Sanchez (of Amparanoia) – is a nod to the Spanish and jazz influences that underpin the band’s musicianship.

Garden Ruin is where Calexico fill those dusty, empty landscapes they’ve long documented with a big, big sound. Taking full advantage of the rockin’ Calexico live band, the record distils its multicultural roots, the input of a producer, new domestic arrangements, international affairs, broadening horizons, developing ambitions and changing scenery. It’s not your average Calexico album, but then again, it never is with this band.