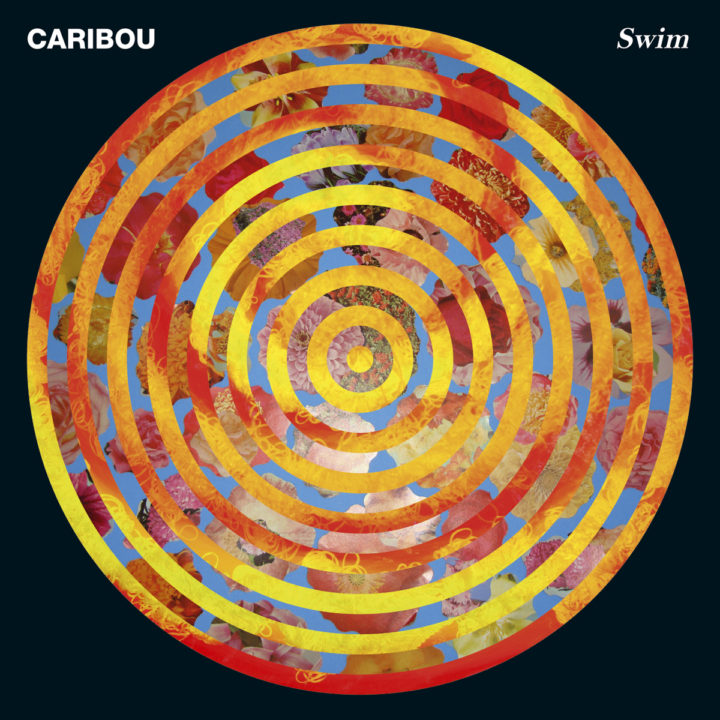 If you think you know Caribou, think again. Dan Snaith’s new album, Swim is the sound of the musical glass ceiling being blown away.

If there is a link to previous album Andorra, it would be in the ravishing explosions of sound pulsing through album closer ‘Niobe’. A continuum of sorts leads us to 2010, but that finale gives mere hints as to the future Caribou. From the opening effervescent gambol of ‘Odessa’ to the glorious odyssey of ‘Jamelia’, it’s crystal clear that Caribou has made a massive leap forwards, upwards and sideways.

With the trajectory of his previous three psychedelic wonderland albums culminating with The Flaming Lips asking Caribou to do ‘something special’ for ATP NYC in September 2009, Dan put together a 15 piece band including the likes of Marshall Allen (Sun Ra Arkestra band leader) as part of a 5 piece horn section, Kieran ‘Four Tet’ Hebden, Jeremy ‘Junior Boys’ Greenspan, Koushik, Luke ‘Born Ruffians’ Lalonde, four drummers, gong, synths, vibes and everyone who has ever played live with Caribou, collaborating on the most epic Caribou performance, ever.

“Definitely dream come true type stuff for me to make that happen with all my friends and Marshall Allen up there killing it at age 85,” Dan swoons. “I hope we get to do it again but in some ways it seems like a logical end to the chapter of my music that’s been big, messy psych records.”

Swim is full of brightly textured, rapturous gems that gleam with astonishing production – and then wrenches at your heart with soulful, thoughtful reveries on the passing of time, family history and the breakdown of relationships. “There are songs about growing old in a relationship, about divorce and loneliness in old age but the lyrics are generally pretty abstract sketches of what’s going on in the situation in my head.”

We can’t think of another multi-instrumentalist/ producer/ songwriter/ singer/ arranger/ composer who has the ability to harness all these talents into something as breathtakingly gorgeous yet dancefloor-ready as Dan Snaith.

We’re not alone in thinking just how special Caribou is. After the winning the prestigious 2008 Polaris Music Prize (Canada’s answer to the Mercury Music Prize, where he saw off the likes of Black Mountain & Holy Fuck in so doing), Dan decided to use the winnings to take his home production ethic to the next level.

Enlisting Born Ruffians’ Luke Lalonde to sing ‘Jamelia’, and mixing expertise from, David Wrench (of Julian Cope's Black Sheep band and a scholar and solo recording artist of 16-18th century songs of insurrection in a doom metal style) in Bryn Derwen Studio in Wales and Jeremy Greenspan’s Pistachio studio in the pairs’ home town of Hamilton, Ontario, Swim has a widescreen, audiophile depth not previously heard on Caribou’s endearingly scruffy albums Andorra and Up in Flames.
“I got excited by the idea of making dance music that’s liquid in the way it flows back and forth, the sounds slosh around in pitch, timbre, pan... Dance music that sounds like it’s made out of water rather than made out of metallic stuff like most dance music does,” Snaith says.

And boy, how he achieved this in spades! There are so many highlights and memorable flourishes here. From the more assured nature of Dan’s vocal takes meshed in the midst of the swirling majesty, the sonic thrust of ‘Kaili’, the relentlessly bubbling addictive nature of ‘Sun’. The fluid interplay of flute and percussion of ‘Leave House’ colliding with a splendidly distended vocal take from Dan that drops in and out of the mix to leave us in a veritable frenzy. Oh, and ‘Found Out’s John Carpenter-esque dread with killer guitar licks from Dan Snaith himself.

And we haven’t even arrived at album highlight ‘Hannibal’ featuring a horn section (see below) throwing down warm and vital instrumentation amidst the bounce. This track seems nigh on perfect, as does ‘Bowls’ with its oozing bass, stuttering Tibetan bowls and a percussive clatter that seems at stages like it is literally melting (James Holden agreed to remix the track on the spot upon hearing it). It also helps that it sounds as though Dorothy Ashby is guiding proceedings! The final track ‘Jamelia’ (yes it is named after her if you want it to be) seems to take all elements of the component parts to breaking point in the best possible way. The cut and thrust of this tune is simply marvellous, especially the use of coruscating string shards cutting through the mix. Both of these latter tracks will be seen as benchmarks for production in 2010.

Through getting all the musicians together for the Caribou ATP extravaganza, Dan met a quartet of young free jazz players from Toronto - Colin Fisher (tenor), Kyle Brenders (bass clarinet and soprano saxophone), Rob Piilonen (flute) and Steve Ward (trombone), who recorded their parts in Toronto straight after the ATP show. Their contributions also mark a significant shift in the Caribou path.

This year will also see a dramatic difference in the Caribou live performance. Now that technology has finally caught up to Dan’s ambitions for the band’s show, while it will still be four musicians on stage, the dynamic interplay between visuals, electronics and the live sound is totally pliable.

“Now we can play the mix onstage like a dub mixer would - but even moreso than a Lee Perry because almost everything can be manipulated - not just the things that are controlled on a recording studio mixing desk. We can get that washing-around feeling and the unpredictability of sounds undergoing changes all the time.” They say it takes a few years for the new century to kick in… here we go.

Ready for the new Caribou future?