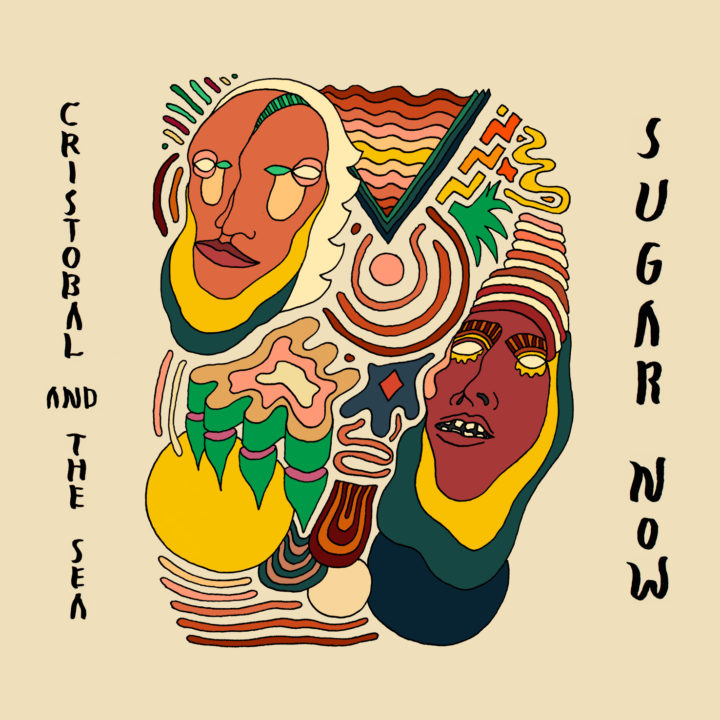 Cristobal And The Sea Sugar Now

London based cross-European group Cristobal and the Sea are excited to announce news of their debut album ‘Sugar Now’, which is set for release 2nd October via City Slang.

The ongoing dispute over explorer Cristobal Columbus’ nationality shows some country disputes will stay unresolved, but others are born to harmonise, in the case of Cristobal And The Sea. The London-based union of Alejandro ‘Ale’ Romero (bass, vocals, Spain), João Seixas (guitar, vocals, Portgual), Leïla Seguin (flute, vocals, Corsica/France) and Joshua Oldershaw (drums, UK) harnesses an altogether fluid, rhythmic and exquisitely melodic energy as colourful and evocative as their band name, forged from different strands of DNA, primarily bossa-nova, Afro-pop and Western folk and rock, but even here it’s varied, as much Animal Collective as it is Arthur Lee’s Love.

The rich variety of sound apparent in ‘Sugar Now’ makes it hard to pin down the music’s true origins, “We don’t ever consciously make our music sound like a genre.” says João. Instrumentally, it’s led by Leïla’s jazzy flute as much as João’s bossa-nova preferences: “the Latin element is always there,” says Josh, “but it naturally adapts to whatever theme is most prevalent, whether it’s psychedelic, or more poppy, or sometimes a bit disco.”

A much stronger influence is Cristobal’s willingness to follow intuition rather than more rigid plans. That spirit, and their intrinsic jubilant and bittersweet mix, is infused in their album title. “We struggled to name the record for ages,” admits Ale, ‘Sunset of Our Troubles had a long outro, so Rusty decided we sing over it, but we didn’t know what… Throwing out pure spontaneous syllables, he just blurted “sugar now, sugar now!”… It was the opposite of everything else we’d thought’

“I guess it fits with is being sweet and tender!” João suggests, to which Ale adds, “The title is playful and naïve, which is just who we are, and how we are with the music.”

The way the band formed follows suit. Ale, João and Leïla were all international students at Loughborough University; the boys were flatmates who felt somewhat apart from what they discovered to be a sports-heavy campus, and so would often stay in, hosting house parties and jam sessions for friends. Leïla came to one of them, yet it was another year of jamming before the idea of a bona fide band was floated. “We never really took it seriously, there was no ‘we’re going to be in a band and we’re going to make it’ discussion,” says Ale.

But after moving to London after graduation, Cristobal became real. João and Ale flatted with, among others, Josh, which was handy as the trio were searching for a live drummer to replace their drum machine. The quartet’s initial gigs soon paid off, with a publishing deal leading to City Slang, who teamed them with Brooklyn producer Rusty Santos (Animal Collective, Beach House).

Seeking a location to inspire them, and chasing the sun as well, the band and producer decamped to Lisbon for the album, which allowed Sugar Now to come from a different place. “We’d previously used a lot of effects on our instruments, but when Rusty saw us rehearse, he said not to use any” João recalls. “It meant we had to play in a different way, which made things a bit funkier, and we liked it enough not to put the effects back! So the album is more stripped down and open-ended."

The lyrics (mostly by João) mirror the music’s dynamic - dreamy, ecstatic and only occasionally melancholic. “It’s about the day-to-day experiences that people have, sometimes fun and sometimes cathartic,” says João. It’s not a dark record, but it has little twinges…”

Some songs are direct and simple, whilst other sentiments are slightly more complicated, The hope and anxiety of romance colours Sugar Now, “but not in any overblown sense, it’s more the realistic form,” Josh concludes. As João says, “It’s about a bunch of people asking for sugar! Everybody needs some sugar in their lives.” Charismatic, charming & beautifully boho, here’s a band embracing life as only the young & carefree know how!

At their own shows, or the recent support for Jose Gonzalez, Cristobal And The Sea have dished out the sugar, and received a lot back from audience and reviews alike. For some, life is sweet…