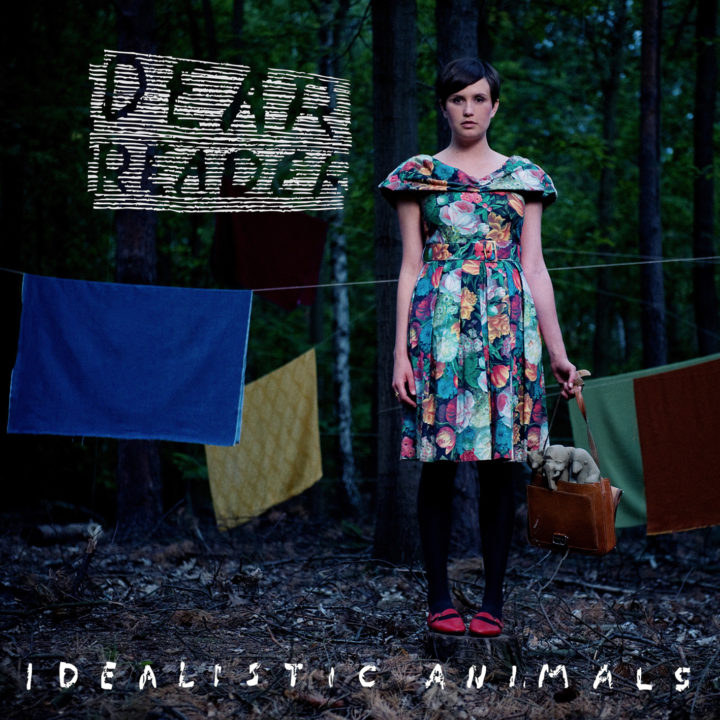 There are break-up records, and then there are break-up records. Idealistic Animals is a break-up record, but it’s not the kind that finds 28 year old Cheri MacNeil, the woman behind the artful, charming Dear Reader, weeping into her chamomile tea about a cold-hearted cheat who left her high and dry. Instead it’s a break-up record with faith, an album that examines the consequences of realising that the very foundation on which one has built one’s life is worse than flimsy. In her earlier years MacNeil devoted her life to her faith in a manner that she admits was close to fanatical, but, at the start of her twenties, doubts started to creep in. Some of these were hinted at on Dear Reader’s debut album, the gentle but occasionally biting Replace Why With Funny, and she’s not the first to wrestle with such problems: coincidentally, labelmates Menomena have sought solace in art as they struggle with the repercussions of a religious upbringing, and their Grammy nominated designer, Craig Thompson, addressed the topic in his multi-award winning graphic novel, Blankets. But, on Dear Reader’s follow-up, MacNeil examines and responds to the fallout that’s followed the loss of her belief system in an unusually transparent fashion, expressed with an instantly recognisable blend of heart-on-the-sleeve honesty, fanciful poetry and winningly crafted songwriting.

“Faith made me feel like I meant something, that I had a purpose and a role to play in a greater narrative,” she explains. “Everything that happened, happened for a reason. Now that I’ve lost that belief, everything seems aimless and chaotic, and I’m still coming to terms with the fact that I feel like I’m at the mercy of completely random elements. When I tackled these ‘big questions’ along with the rest as an adolescent, I chose to believe that I was an important part of a saga with a happy ending. Now I am aware that there are no tidy conclusions.”

Idealistic Animals addresses grand themes in simple terms: the search for a structure that can fill the void left behind after the loss of fundamental beliefs, the hunt for meaning in life, the random nature of our existence, and the fact that, when push comes to shove, there’s little separating humanity from the rest of the animal kingdom. “The record is quite fatalistic,” MacNeil admits, “my worst fear being that life is completely meaningless and I have absolutely no control or power.”

Deepening the sense that she had lost her anchor in life, the record also marked another significant change for Macneil: she was forced to separate, albeit amicably, from her musical partner Darryl Torr. He chose to stay in South Africa to pursue his burgeoning career as a producer when MacNeil decided to move from the artificial sanctuary of Johannesburg to Berlin. Though she’s refreshingly nonchalant about the city, the culture shock was still considerable: she jokes that her life had previously been so sheltered that she’s only now seeing things most people were bored of by the age of 18.

Unless you listen closely, though, you might not recognise the sentiments that lie at the album’s heart. Dear Reader have always specialised in songs that sound as sweet as chocolate cheesecake, Macneil’s remarkable voice – pure and unpretentious, passionate but gentle – a soothing presence that masks chunks of confusion, even bitterness, hidden within. Not for her lines that are open to interpretation, normally a lyricist’s excuse for failing to express anything of real value or clarity. Macneil’s feelings just tumble out, the pill instead sugared by a deceptively simple musical environment full of colourful distractions.

The unique set of circumstances behind the album’s genesis – a top to bottom search for a new way to exist – lends the record an unusual air of cynicism and candour that has allowed her to name each song after an animal, as though the album is a 21st Century take on Aesop’s Fables. Not many people could pull off a song like ‘MOLE (Mole)’, which features two myopic animals colliding underground, or ‘(WHALE) Boohoo’, in which she imagines she’s a giant wave overwhelming New York, and few would delight in throwing a Shape-Note choir into the middle of the otherwise placid ‘CAMEL (Not Black Or White But Camel)’, something MacNeil did after she found herself fascinated by their unusual vocal style. But Macneil’s style is singular, and all the more seductive for it.

The album was initially demoed on piano and guitar before MacNeil began gathering musicians around her, from Calexico’s Martin Wenk to her sound engineer’s parents. Following his work on the debut album, the inestimable production skills of Brent Knopf (Ramona Falls, ex-Menomena) were then called upon, with two weeks spent in Leipzig – “It was kind of like camping,” MacNeil recalls, “there was no real kitchen, no hot water, we were holed up with only one key so we basically didn’t leave!” – and then further sessions and mixing in Portland.

The result is a record that somehow combines the classics and the contemporary, from the candour of Joni Mitchell and the sweet eccentricity of Kate Bush to the refined simplicity of Leslie Feist and the inventive vocal clarity of St Vincent. Given that MacNeil cheerfully admits that she rarely listens to music, this is an even greater achievement. But this has also contributed to the unusual qualities that the record displays: Dear Reader don’t chase prevailing trends or jump bandwagons. They just speak from the heart.