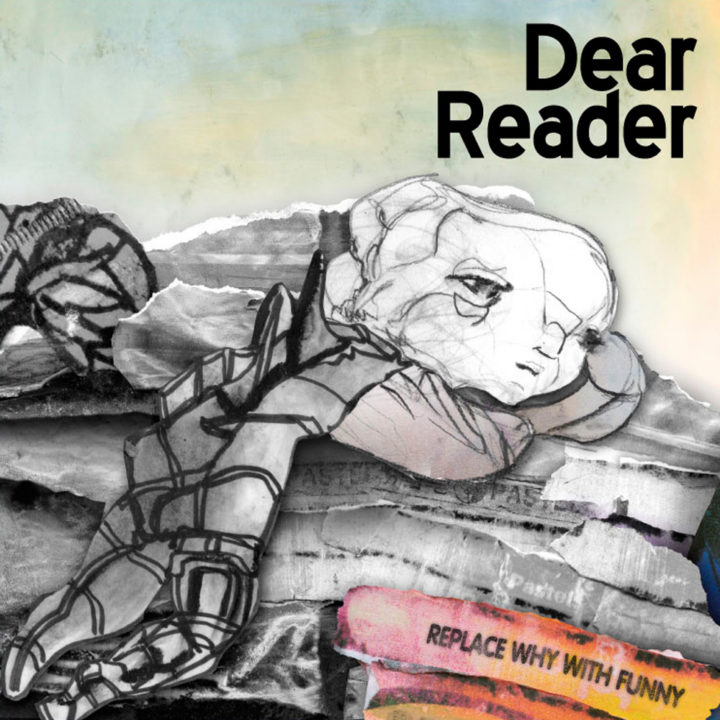 Dear Reader Replace Why With Funny

“I love it here,” Cheri MacNeil says of Johannesburg, South Africa, where she and musical partner Darryl Torr formed Dear Reader some four years ago. “And I hate it here. A lot of the time I feel really alienated. I feel like I don’t belong. But neither do I belong in Scotland or England or the Netherlands, where my ancestors come from. This is my home.”

Her statement sums up the contradictions at the heart of a band whose debut album offers on one hand sweet melancholy, escapist flights of fancy and “extra-sticky” (as they call them) melodies, and on the other hand a gritty sense of the complex realities of day to day existence that are reflected in the enviable intricacies and depth of both their lyrics and their arrangements.

“We live in fear all the time,” she continues, and for once this isn’t a melodramatic quote designed to emphasise the authenticity of a songwriter’s muse, or a sweeping generalisation about the state of our 21st century world. That wouldn’t be Cheri’s style: she specialises in shrewdly observed, confessional intimacies delivered in a voice of extraordinary clarity and pristine beauty. It’s just a simple statement of fact, a reflection of a place where, as she puts it, “our homes are fortresses behind bars with electric fencing and alarm systems, and there are destitute people begging on every corner”. She’s not exaggerating: with its 40% unemployment rate, one of the world’s highest crime rates, and a tragic and unmanageable flood of refugees filling Johannesburg’s grim housing projects, South Africa remains a country ravaged by social and economic problems.

But there are two sides to every story, and Dear Reader specialise in exploring both, as the bitter sweet magic of Replace Why With Funny attests. “Our country is also very beautiful in a rugged way,” MacNeil adds, “There are the savannah parts where it’s dry and dusty and the natural vegetation consists of thorn trees and you can see elephants and lions and giraffes. And then there’s semi-desert, where the stars make the sky white, and huge mountain ranges, tropical forests, gorgeous beaches… It really is amazingly beautiful.”

Maybe it’s unnecessary to emphasise the geographical location of where Dear Reader come from, but they are a product of their homeland, and that’s something they clearly recognise: their relative isolation from western culture means that, as Darryl puts it, “it feels as if I am looking at the world from the outside in”. Their upbringing and environment have shaped the way they see the world and coloured the way they make their music. That doesn’t mean, however, that they are merely a more authentic version of African-influenced acts like Vampire Weekend or Yeasayer, both of whom sound like nothing like them at all. It simply ensures that they offer a jumble of influences tangled together in new and original shapes, familiar but fresh.

Replace Why With Funny is a shiny little pearl of a record and the first thirty seconds of opening track ‘Way Of The World’ encapsulate its contrary charms. Creeping in on the rattle of guitar strings, it skips merrily along a melodic path honeyed with simple harmonies until MacNeil shatters this short-lived illusion with an almost imperceptible but universally recognisable sigh.  It’s an endearing injection of reality, typical of a band who constantly explore contrasting emotions, MacNeil’s exquisitely pure voice offset by the despair she’s expressing, her melodies masking lyrics largely focussed on the break-up of a relationship, and which she confesses were “written for me, to help me deal with feelings of loneliness and betrayal and that bitter feeling that real love is an elusive state only meant for the elite lucky few.”

So while the album has its fair share of bright-eyed moments, they are, like MacNeil’s voice, merely sugaring the pill, acknowledging the fact that sometimes we actually revel in our own melancholy. Relish, therefore, the contrast between the French horn, strings and the glam stomp of ‘Dear Heart’, as its protagonist delights in writing her first optimistic love song (“I never wrote a long song that didn’t go ‘oh woe is me’”); the sudden burst of Morricone strings and subsequent Hazlewood-ian twang in ‘Bend’; the extraordinary image of the belly of a ‘Great White Bear’ as a hiding place, and the song’s stirring climax; the choral epiphany of ‘Never Goes’ and its haunting refrain, “I’m alone, I’m alone, I’m alone…” And you can’t help but admire the frank attempt to address what it feels like to be a white South African in the brutally honest ‘The Same’, a song that pleads for understanding but recognises feelings of conflict within as well as between each individual: “Please don’t look at me that way / I already live with the guilt that I own / From my forefather’s past”.

It’s a record created in relative cultural isolation – “sub-Saharan Africa isn’t exactly on the map when Arcade Fire are planning a world tour,” laughs MacNeil – and sheltered from ephemeral fads – “we use the internet to experience bands and music we love when the rest of the world is experiencing it first hand,” sighs Torr. But perhaps these are reasons why it’s delivered so unpretentiously from the heart and speaks so successfully to the mind. Because Replace Why With Funny is bright and breezy, world-weary and wise, and perhaps the most honest record you will hear all year.

MacNeil and Torr met at an ad-hoc musical gathering and released a first album – under the name Harris Tweed – in 2006. She’d been studying languages and politics, but Torr – who worked as an engineer and producer, and who before that had been in bands since he left school – persuaded her to focus on writing and performing music with him. She and Torr gelled so swiftly that they were soon heard on South African radio, appearing on South African TV, and playing shows around the country, even opening for Jose Gonzales. A trip to South by South West in 2007 awakened new ambitions, but it was a short run of dates in Europe later that year that led to a crucial creative meeting of minds that brought out the very best in them both.

“On our day off some friends took us to see Menomena,” MacNeil explains. “The place was packed with people singing along to the strangest music I had ever heard. After that I listened to their album every single day solidly for three months, so when we were looking for a producer I sent a myspace message to the Menomena guys, something along the lines of ‘I think you guys are geniuses and I love your music and is there any way you’d consider coming out to South Africa to produce our new record?’ and they replied! I was jumping around and screaming like a banshee!”

Thus Menomena’s Brent Knopf wound up in Johannesburg in one of the year’s more unlikely pairings. His influence was vital: he helped lead MacNeil and Torr away from the gentle folk-pop they had so far recorded and dramatically expanded their musical canvas. Torr admits it took a little while to adapt: “My focus was more about recording the parts as beautifully as I could, whereas Brent was more focussed on capturing the rawness and energy of the song.” But such experimentation soon invigorated them. “Brent was running around, barking at everyone, jumping from instrument to instrument,” MacNeil reminisces. “He was just so into it. We gave him a lot of freedom and let him lead us. I really do think he is a genius.”

Between the three of them they have created a record of exquisite poise, tense drama, witty candour and accomplished detail. MacNeil’s voice – with its gentle innocence, syncopated delivery and singular turns of phrase recalling the likes of Joni Mitchell, Natalie Merchant and Stina Nordenstam – is what initially grabs the attention, but it’s her songs combined with Torr’s (who mixed the record) and Knopf’s wildly imaginative and often extravagant arrangements, the memorable sonic layering and eccentric details, that keep you returning to its immeasurable depth.

They take their name from Charlotte Bronte’s Jane Eyre. “I love the way it’s written in the first person,” MacNeil explains, “and every once in a while she addresses you with a ‘dear reader’. I like that sense of connection between reader, writer and plot. That’s what we’re interested in when we’re making music: connecting with the people who are listening, commiserating with one another”. Replace Why With Funny is just the start of the story…