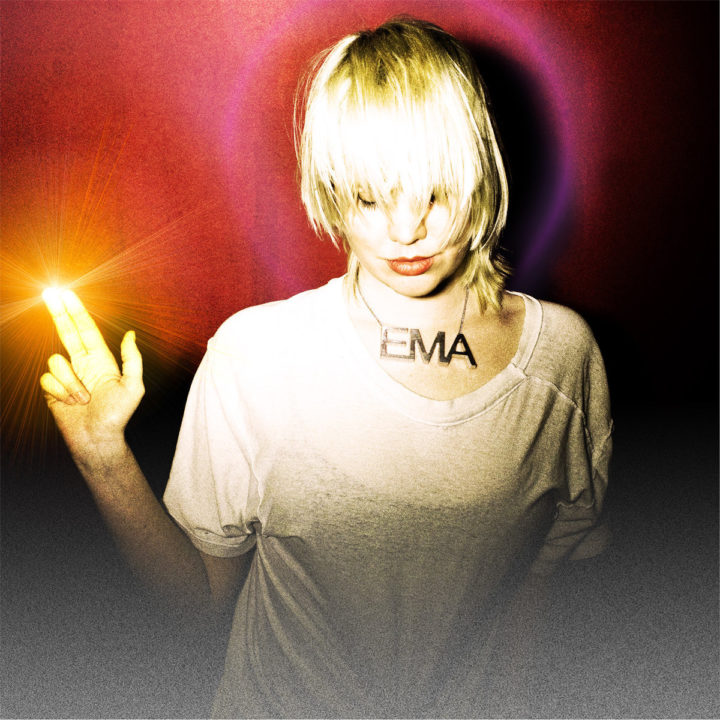 If you’re a fan of guitar noise, Erika M. Anderson (EMA) may already be familiar to you. A South Dakota native, she moved to LA when she was just 18, because she really liked ‘Welcome to the Jungle’. There she played a mean guitar in legendary folk/noise outfit Amps for Christ before forming the genre-defying cult duo Gowns with Ezra Buchla. Gowns' 2007 album Red State was an electronic folk and feedback drenched masterpiece that left critics both raving and bewildered. Foxy Digitalis compared them to Godspeed! You Black Emperor while Pitchfork compared them to the Mountain Goats. One could make the case that both were right.

There were also Gowns’ explosive live shows, often revolving around EMA’s spellbinding vocal delivery and stage presence. After seeing them at a New York showcase, the Village Voice was left to succinctly declare: “Holy fucking fuck!”

In the wake of Gowns’ demise, EMA has struck out on her own. Her debut single is the seven minute ‘Grey Ship’, backed with a glorious seventeen minute cover of the Robert Johnson blues staple, ‘Kind Hearted Woman’, where she claims to channel the entire history of rock and roll, from “birth to destruction”. Stand back people, lady making a grand statement, coming through…

“I love really long songs, really long pieces, and I wanted to see if I could make an engaging piece using primarily just voice and guitar,” EMA explains. “And I love the sound of guitar feedback. Tonal guitar feedback is one of my all-time favourite sounds.”

‘Grey Ship’ is a nod to the Viking funeral ships of her ancestors, and while pop logic dictates the tune is divided into two parts, one sunny and strummy and the other low-lit and dramatic, the recording also switches up from lo-fi to hi-fi. WARNING: If you are listening to this on laptop speakers, you are not going to hear the bass drop!

As EMA explains, “I wanted ‘Grey Ship’ to change fidelity in the middle of the song. I imagined it being like when Dorothy opens the door to Oz and the whole world turns from black and white to technicolour.” That change in fidelity also serves as a “sonic signifier” for transferring from the earthly plane to one beyond.

Regarding the monumental ‘Kind Heart’, it is not only epic, but spellbindingly, heart-stoppingly so. To make seventeen minutes this engaging is ‘really fucking hard’ EMA admits, but EMA, she’s not your average indie guitar dabbler and makes this seem like a casual stroll in the park.

As a completely self-taught musician and home-recording engineer, EMA obsessed with an intensity that led to heartbreak as often as breakthrough.

“Recording this piece was probably the hardest thing I have even done. So many things went wrong that I began to think that there was actually a curse on this song. I was like, ‘Is Robert Johnson fucking with me? Maybe I'm not worthy to do this song! Maybe this is somehow completely sacrilegious!’.

“I then spent months trying to mix about 20 tracks of guitar feedback on headphones in my bedroom. The vision of this was beyond my capabilities and budget and it almost broke my heart. Also I’m such a perfectionist I didn't want to put it out into the world unless it fucking slayed.”

In the end, it’s her voice that makes any debate about the credibility of her musical musings pretty much irrelevant. Evoking the whisper-to-yell dynamics of early Cat Power but without the oft-copied melancholy, or early Liz Phair’s intimate and visceral expression, it is a voice completely compels the listener. Her songs are filled with harmonies and hooks that exist right in those sweet spots between melody and dissonance. It is a knowing voice, the sound of a drunken laugh while crying.

Her forthcoming debut solo album, Past Life Martyred Saints, casually rips up the rulebook and announces a vital new talent bound to set 2011 alight with a voice like no other.