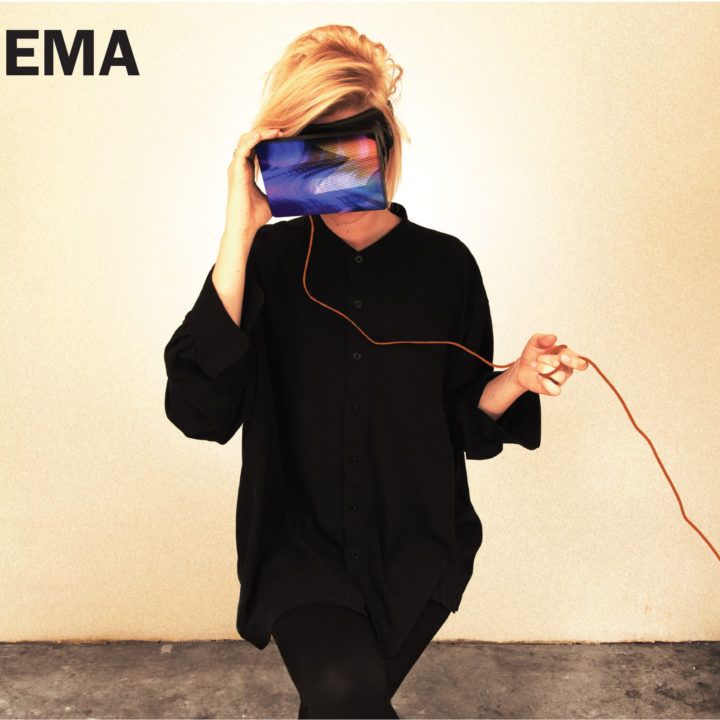 Having teased us with a new track ‘Satellites’ last month, released to rave reviews and scored Pitchfork’s Best New Music who said “The most bracing thing yet from an artist already more bracing than most”, EMA returns with her highly anticipated second album The Future’s Void, released on 7 April via City Slang.

Erika M. Anderson first graced the limelight under the guise of EMA in May 2011, when the brilliantly scuffed debut album Past Life Martyred Saints was released to a multitude of acclaim.  After having spent time in the California underground fronting the genre-defying cult duo Gowns with Ezra Buchla, Past Life Martyred Saints offered a deeper glimpse into the world of EMA. An absorbing and ambitious masterpiece that revealed a unique and feed-backed noisy guitar style, a skill for visceral songwriting and a DIY recording ethos, it showcased a distinctive sonic signature that sounded like nothing else around.

If Past Life Martyred Saints was an inward exploration of human relationships and their toll, The Future’s Void catapults them out into space, both thematically and musically. The album meditates on universal themes of how we interact with the wider world and how that interaction is increasingly modified by technology. Through collaboration with Leif Shackelford on production duties, the sound of this record reflects these themes and instead of using electronics to create a polished, airless environment, Anderson's techno-future thrashes strongly between harsh tones and paranoia, to beautiful colour bursts and mellow guitar strums.

Lyrically, Anderson tries to answer the question so often put to her during the last round of press and interviews: "How does it feel?" to be pushed through a media vortex and back. The answer is of course, complicated. On ‘3Jane’ she seems plaintive and introspective, with lyrics about visuals and consent that are even more poignant in the age of posted YouTube assaults, bullied teen suicides and revenge porn. On ‘Neuromancer’, an electronic punk rant with analog synths and machine drums, she rages, and explores the implications of building an online database of all your pictures and information. "It's basically an AI (artificial intelligence)" she says. And it's not just those in the media spotlight who have them, it’s all of us.

This is where Anderson has always excelled, in taking the chaos and angst of the modern age and making it relatable. While sonically The Future's Void is a big step up and out, lyrically it's in a similar vein to Past Life Martyred Saints, with EMA herself laying bare, cracking sly jokes, and making the nuances of her story seem like ours as well.

“I realised that we were all kind of building these AIs, whether intentionally or not, and how the data we post online is parsed by programs that see patterns in our behaviour that we fail to see ourselves; how and where and what we eat, status reports that reveal our moods, our shopping habits, who we date and who we stalk, where and how we spend our money. Literally, they know more than you do about the things that you do. And that's just the data we give up willingly, to say nothing of what is taken surreptitiously.”

The opening track "Satellites" was written before the current NSA scandal and hints at a more nostalgic paranoia, in drawing current parallels to the dream of the former Soviet "satellite" countries, where "everyone has equal access but is also under constant surveillance". Musically the track hints at a further emboldened EMA, without forgoing the industrial-noise and glorious fuzz of her solo debut and previous work with Gowns. Opening with a wall of hiss, scree and galloping piano motif, ‘Satellites’ bursts into a flame of feedback and bass to provide one her best tracks to date, as well as introducing analog modular synths into the mix.

As well as EMA pulls off these topical and outspoken tracks, she’s still got a knack for a classic pop tune as heard on the likes of ‘So Blonde’, with its hooky grunge riff and playful lyrics about “generic and specific cool blonde kids, maybe you knew one in high school or college or at a party at 5am in your 20s”. Similarly, the catchy ‘When She Comes’, a nostalgic paean about a teenage Riot Grrl friendship. Along with ‘Dead Celebrity’, these tracks are at odds with the more abrasive and electronic likes of ‘Solace’ and ‘Cthulu’, the latter climaxing with a Gary Numan ‘Are Friends Electric’ style breakdown that sounds like nothing Erika has produced before. Despite moving towards electronic sounds, the machines are mostly played live and they often possess a DIY ‘first take best take’ aesthetic that rails against the carefully constructed and glistening sheen of the digital age.  This punk spirit maintains a spontaneity that is all too often lost.

“This record is the sound of resistance to digital commodification” Erika explains. "I naturally gravitate towards hooks and melodies and in some ways, the structure of these songs is the poppiest yet. The harshness and production strikes a balance with that so they don’t sound like they could be on adverts.”

So, The Future's Void means the future IS void? Or the void that belongs to the future? According to Anderson, both work.

Either way, The Future’s Void is a record that seeks to deal with the fact that certain ideas that once seemed futuristic are now the norm, while also trying to sidestep a lot of the musical tropes that come along with exploring technology. It straddles the ugly and animalistic, the pretty and civilised, the digital and the analog and the past and the present, resulting in a timeless and yet timely piece of work. And like any great punk record, it questions social convention and rebels against the status quo.

EMA continues to evoke a unique and ambitious sound that saw her rightfully recognised as one of the most singular artists to emerge in 2011, and is likely to send her back into the public consciousness once again in 2014.