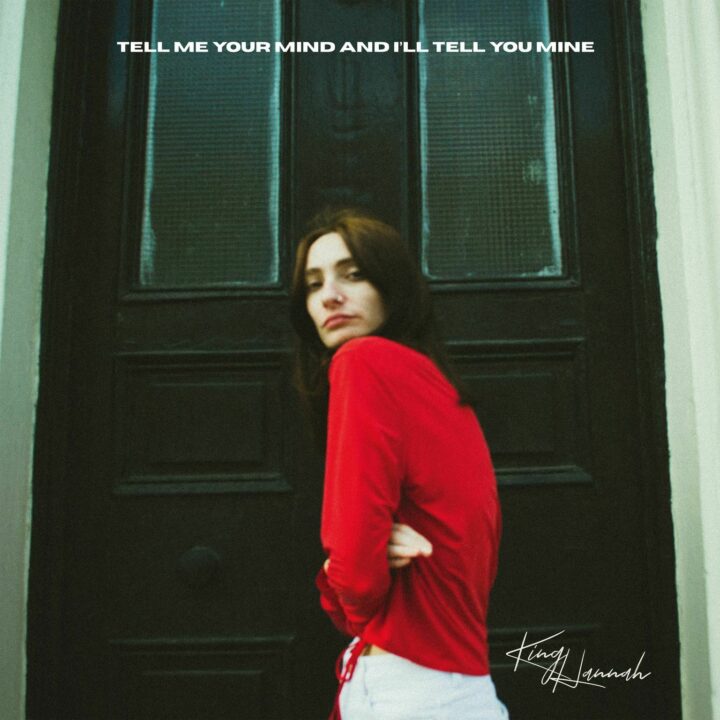 King Hannah Tell Me Your Mind And I'll Tell You Mine

Sometimes a band arrives out of nowhere, with a fully formed sound ready to fill a stadium. King Hannah are one of those bands. The Liverpool band led by the creative force of Hannah Merrick and Craig Whittle have arrived with ‘Tell Me Your Mind And I'll Tell You Mine’, an EP that is both soothing in its moods and intoxicating in its rushing soundscapes, containing a sound that is both brand new and completely mature. Their neon guitar lines and intimate torchlight vocals put the everyday on a pedestal, lifted by melodic licks that swell into dense and swirling atmospheric textures.

‘Tell Me Your Mind And I'll Tell You Mine’ sounds like late nights and early mornings, from the beauty and closeness of acoustic guitar in opener "And Then Out Of Nowhere, It Rained", to the final immersive thicket of distorted guitars in “Reprise (Moving Day)”. In between, "Meal Deal" is smoky backroom Americana transposed onto the precarity of finding somewhere to live; "Bill Tench" feels like melancholic euphoria of travelling in fast cars at night – drums flash past like lines on the asphalt with angular guitars. "Crème Brûlée" is a moody fugged-out ballad for the everyday, and "The Sea Has Stretch Marks" conjures a whirling post-rock exploration of cinematic memories. King Hannah lean in to immersive moments in their music. "We want people to get lost in the music," says Craig.

Craig formed King Hannah before Hannah knew anything about it. He had seen her performing years before, but they didn't meet until she was assigned to show him the ropes at the bar job they'd both taken on to get by while still making music. He immediately pestered her to play some music with him, and they started a routine, spending the hours before work at Craig's house, where for a long time Hannah could not pluck up the courage to play him her own music. "That went on for a year," said Hannah, while Craig just waited patiently for her to play. When they finally got to writing their own songs together, everything clicked into place.

Both had played in bands before, but until they started King Hannah, neither had found what they were looking for. Hannah grew up in Tan Lan, the world's smallest village in North Wales, and can't remember a time when she didn't want to be a singer. Craig started playing guitar age 13, and was taught Jackson Browne songs by his older brother. Within a year he was playing in bands. All this changed as soon as they formed King Hannah. "It's just about finding the right people. When I go to Craig with some chords and lyrics, he just gets it," says Hannah. "If we hadn't found each other, I don't know where we would be," says Craig.

Led by Hannah and Craig, the density of their sound comes from the combination of their guitar and vocals with support from Ted White, Jake Lipiec and Olly Gorman. Inspired by the vocals of Mazzy Star and guitars of Kurt Vile, Hannah writes lyrics first thing in the morning and lets her mind spill onto the page, and they contain all the raw vulnerability and mundane reflections of that mental space. This vulnerability is something Hannah feels acutely on stage, but is also what makes their music so magnetic. "There's nothing pretend about us," she says – the grit in their sound and her voice speaks volumes. "We don't want to sound clean or polished," says Craig, "we want to sound real, and dynamic and authentic."

Pre-order the LP at the this link