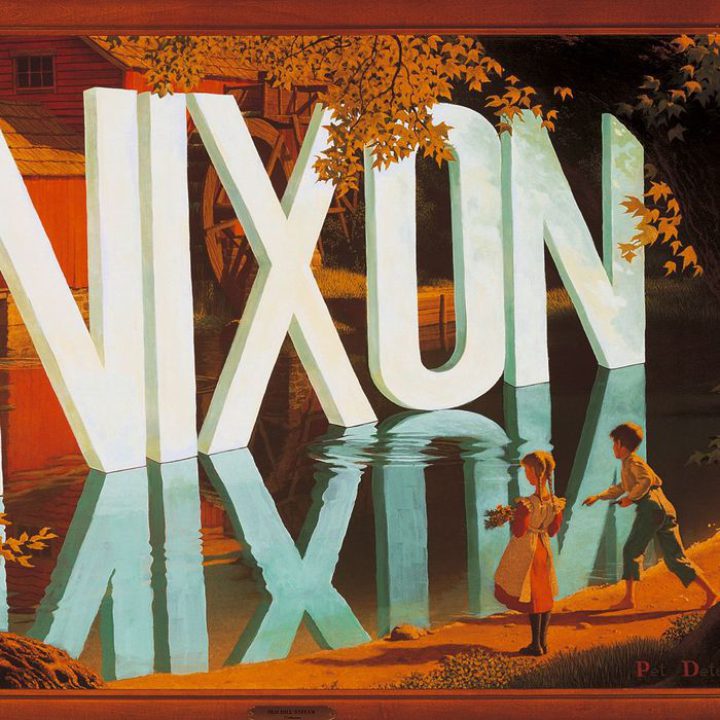 Much has been said and written about Nixon, the album that broke Nashville's finest little big band into the mainstream in the UK (we walked into the Met bar one night in 2000 and saw Noel Gallagher and Patsy Kensit and people like that, and guess what was playing on the bar's hi-fi? Is that considered mainstream?).

It was album of the month left, right and centre and album of the year in Uncut, if we remember it correctly. Maybe not. Still, it's sophisticated mix of alt-country, white man's soul music, gospel choirs and thick use of strings and Kurt Wagner's last chance to lay down some falsetto vocals before age, smoking and whiskey caught up with him were a sensation. The Zero 7 remix of Up With People added longevity and weight to a campaign that stretched well into 2001. This re-issue comes with an additional full concert DVD from Lambchop's second London show at the legendary Royal Festival Hall with an added string section. Filmed by a TV company that consequently went bust, we were able to save this gem of a document from the vaults of the insolvency and present it here in its raw original form.

PITCHFORK: Nixon is the album when Lambchop became the band people think of as Lambchop, if they think of Lambchop at all: 14 outcasts in denim and pearl buttons, standing onstage and staring at their shoes, playing the pro-social sounds of country and soul with the graceful reluctance of indie rockers too polite to beg for attention but too obstinate to shut up and go home. I can only imagine that Merge’s decision to remaster and reissue the album embarrassed them, then made them feel humbled, then a little bit corny—such are the old-fashioned values of Lambchop. Where some bands use bonus discs to pump out hot, unreleased material designed to chart the depths of the band's creative prowess, Lambchop offer a brief set by singer Kurt Wagner on French radio and call it How I Met Cat Power. Even when it’s about Lambchop, it’s not about Lambchop.

Nixon was released in 2000 and immediately enshrined by the British music press. Uncut named it album of the year, Mojo ranked it 10th, and Q was still doing their lists alphabetically. The band sold out the 2,500-person Royal Festival Hall (home of the London Philharmonic), and a Zero 7 remix of “Up With People”—the album’s climactic track—made the singles chart. The NME called Nixon “near to perfect” and the Guardian said that the band was “reinventing American music.”

Meanwhile, most people in America continued to have no idea who Lambchop were. (“I don’t think [Nixon] made much of an impression on anyone over here,” Wagner told a seemingly baffled interviewer in spring, 2001.) Lambchop’s take on America—sly, tender, mysterious but mundane—is less a realist’s portrait than a surrealist’s impression: funnier, more pathetic, more improbable than what actually exists. In 2007 I met a German man named Frank who told me he loved seeing the band overseas because it meant getting to sit in a plush, quiet room while drinking tons of beer and listening to Lambchop, which I guess he imagined Americans were mellow enough to actually do.

Nixon is still an improbable album. The band never sounds like they’re trying very hard and yet every song breaks some convention or another. Despite its showbiz arrangements, the music is tenuous and weird (a contrast that the band toyed with again on 2012's Mr. M), and Wagner’s falsetto—usually the most vulnerable part of a man’s singing range—sounds less like a Romeo than some karaoke loser scrapping for the mic at last call. He says he regrets ever calling Lambchop a country band, and with good reason: Nixon isn't the music of the people, it's the music of the people who showed up, said hello, stood in the corner and left without saying goodbye. (When an interviewer asked Wagner how he felt about the album’s overwhelming reception in the UK, he said, “I’m not sure that’s something to be proud of. I think there are other things in your life you could be more proud of. Like having kids.”) If there's a connection to country, it's spiritual: Nixon finds its humor in self-deprecation and its soul in things broken and left behind.

Even as a fan, I understand the ways in which Lambchop can seem standoffish and cold. “I’m in the thick of it,” Wagner admits on “The Distance from Her to There”. “I’ve been a dick with it/ You’ll get used to it.” Against the sumptuous sounds of reverb, jazz chords, and violins, he sketches out images of drunken neighbors and people peeing on railroad tracks. “The kids out in the street,” goes a line on the album’s opening song, “The Old Gold Shoe”, “take their toys and break them, and look at them and walk away.” There is no poetry here—no embellishment or elevation. This is just the everyday kind of mean you see when you open the window and look outside.

And yet the secret weapon of Nixon—and of all Lambchop’s albums—is tenderness. “The Book I Haven’t Read”, “The Distance from Her to There”, “Up With People”: these are songs that end up insisting that the world is actually a pretty decent place, not just in spite of the banality and clutter, but because of it. After all the broken toys, the disgusting habits, the broken bottles and falling rain, “The Book I Haven’t Read” ends with the line, “We could be—we should be—in love.”

At its heart, Nixon is an album fascinated by the world at its most fallible and ordinary. “And of that sweet, sweet soul,” Wagner sings on “Up With People”, “Let’s be certain the deliberate monologue/ As sure as if it will fall/ Across you, unto you/ We’ll most certainly leave the doing, the doing undone.” In other words: You’re probably gonna fuck it up.

And yet somehow the song—with its handclaps, high-stepping backbeat, and an ostinato bassline borrowed from the uplifting sound of Motown—plays like a triumph. “We are doing/ We are screwing up our lives today,” Wagner sings on the refrain. Then, with the showman’s point of a finger, he commands a line of gospel singers who go off behind him like fireworks. “Come on, progeny,” they wail, and together, Lambchop enters orbit. Laugh if you want—I usually do. Then, when I’m feeling bad, I draw so close to the song that it starts to sound like a prayer. We all fail sometime. Whether or not we learn to joke about it is up to us.