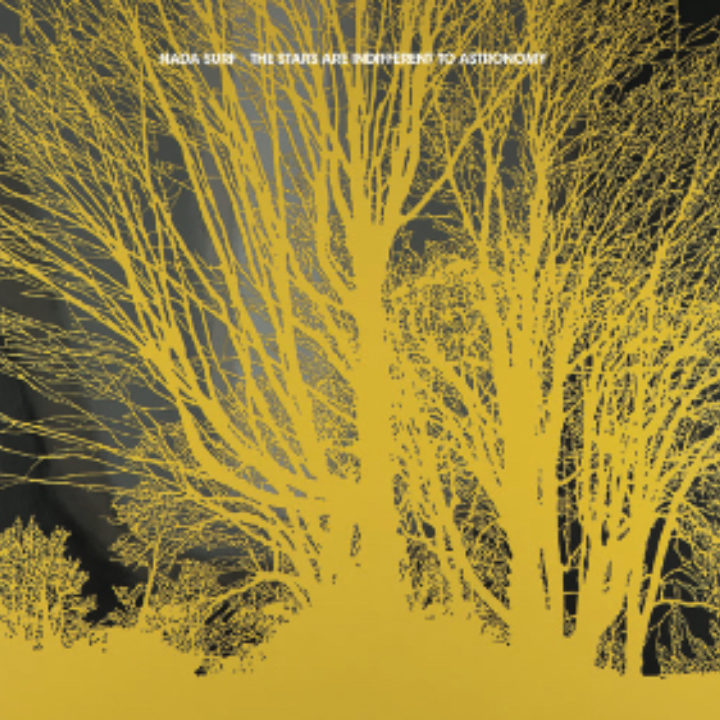 Nada Surf The Stars Are Indifferent To Astronomy

"Did you ever, as a kid, want to crawl into the speakers?" asks Nada Surf singer-guitarist Matthew Caws. "I did — here was OK, but there was much better." And that's pretty much what Nada Surf is all about — Caws, bassist Daniel Lorca, and drummer Ira Elliot are in love with the way rock music can transport you to a new and wonderful place in a beguiling rush of beats, chords, hooks and words. And they do it 10 times over on their brilliant sixth album, The Stars Are Indifferent to Astronomy.

"Did you ever, as a kid, want to crawl into the speakers?" asks Nada Surf singer-guitarist Matthew Caws. "I did — here was OK, but there was much better." And that's pretty much what Nada Surf is all about — Caws, bassist Daniel Lorca, and drummer Ira Elliot are in love with the way rock music can transport you to a new and wonderful place in a beguiling rush of beats, chords, hooks and words. And they do it 10 times over on their brilliant sixth album, The Stars Are Indifferent to Astronomy.

Before, Nada Surf albums simply took on the character of the songs that the band came up with at the time. This one was different — there was a plan. "We've always played faster and a little harder live," Caws says, "but we'd play so carefully in the studio. So with this album, we made a conscious decision to preserve what it felt like in the practice room, when you play with that new-song energy. Just embrace it and not worry whether we’re overdoing it, kind of get all the thinking out of the way."

Sure enough, The Stars leaps out of the gate in a blaze of guitars, swarming distortion and a sweet melody riding atop "Clear Eye Clouded Mind." Throughout, the crackerjack rhythm section of Lorca and Elliot puts the power in Nada Surf's pop, Lorca playing equal parts pedestal and filigree, Elliot ever the stylish dynamo. The tempos are high, but the songs bristle with hooks, breathtaking changes, and Nada Surf's trademark genius bridges. The educated ear will hear the influence of many bands from '60s Brit-pop to post-punk and vintage indie, and yet there is an unmistakable Nada Surf sound: a certain rhythm section groove, introspective chord shapes and the unique emotional weight to Caws's voice, both boyish and very soulful, a combination of wisdom and vulnerability that can admit to being "moved to a tear by a subway breakdancer."

"I really love Nada Surf," author Jennifer Egan told Minnesota Public Radio this year, adding that she listened to the band's music for inspiration while writing her 2010 Pulitzer Prize-winning novel A Visit from the Goon Squad. "What they write about is very subtle moments of everyday life. They make it all look and feel very easy and natural."

Which is quite a trick when, as on The Stars, the running theme of the album is the passage of time. As Caws sings on "Looking Through," "Every birthday candle/ that ever got blown out/ is one more year/ of someone trying/ to figure it all out." The songs ponder all kinds of questions: what to take and leave from youth, how to deal with the burden and the honor of responsibility, how to remain curious and alert even when you're content and how to remain in the natural world as the march of progress pulls us ever further from it. It's all summed up in the last lines of the album: "and I cannot believe / the future's happening to me."

Nada Surf had made all but their first record outside of New York, figuring they'd avoid distractions. But if you want to preserve the energy of the practice room, why not record in the practice room? So for The Stars they set up shop in their rehearsal space in Lorca's long-time loft in Williamsburg, Brooklyn. The place is nicknamed The Sitcom because it regularly hosts a revolving cast of colorful characters and some legendary parties. There were some issues though — "We couldn't do vocals late at night," says Caws, "because the music from the bar downstairs would come through the floor."

Chris Shaw came in to record and produce. Shaw, who’s made records with the likes of Bob Dylan, Elvis Perkins in Dearland, Super Furry Animals and Wilco had mixed Nada Surf's indie hit "Always Love," impressing the band with his quick and expert work, not to mention his sense of humor. They recorded on a strict schedule — in fact, things were so tight that Caws finished his last vocals just 30 seconds before he got in a taxi to catch a flight to London.

A few years ago, Caws met guitarist Doug Gillard (Guided by Voices, Death of Samantha) one night at a show, when the latter ambled over to him and offered to "lay down some James Honeyman-Scott licks" next time they recorded. Caws happens to revere the playing of the late Pretenders guitarist, as well as Doug’s, so the affable Gillard wound up playing on 2010’s covers album, If I Had Hi-Fi, and touring the album with them. Gillard became such an integral part of the band's sound that they invited him to play on Stars too.

"Making this album was such a joy, the most fun we've had with a record," Caws says. "The whole thing felt adventurous and we stayed constructive. I wrote 'Looking Through' in one night and brought it in the next day. The take that wound up on the album is the first time we played it all the way through. There wasn't a lot of talking, it was just bang, there it is."

Immersion in the work of some of the band's favorite musicians on If I Had a Hi-Fi sparked Caws into a songwriting spree — but this time, he was just writing for the joy of it. "For many years I'd only write if I had something troubling going on in my life and I needed to break through," Caws says. "But now I wanted to get past writing about just myself. That new outlook, for me, is the engine for making this record."

Sure, the songs are introspective and yet on songs like “The Moon Is Calling" and "Clear Eye Clouded Mind," and "No Snow on the Mountain" the outer world supplies a lot of the imagery this time, as well as the profound title, which is a saying of Caws’s father, a noted philosophy professor. Instead of self-analysis, songs like "The Future" feel more like a voyage. Some feel unconscious. "I like the lines 'bring me up / deliver me out/ take me to the door/ I'm not running anymore,'" says Caws of “The Moon is Calling,” "because on a certain level, I had no idea what I was talking about, but I felt ecstatic making it up.”

And so The Stars has a somewhat more optimistic, more outward-looking tone than previous Nada Surf albums. On the yearning "Waiting for Something," Caws sings, "This new peace/ I can feel it now," and that serenity — and not anger — is actually what fueled the music's extra kick.

The Stars Are Indifferent to Astronomy continues the notion of music as an alternative reality, and songs as things you can keep by your side for inspiration and support. Which is what makes Nada Surf a truly beloved band.