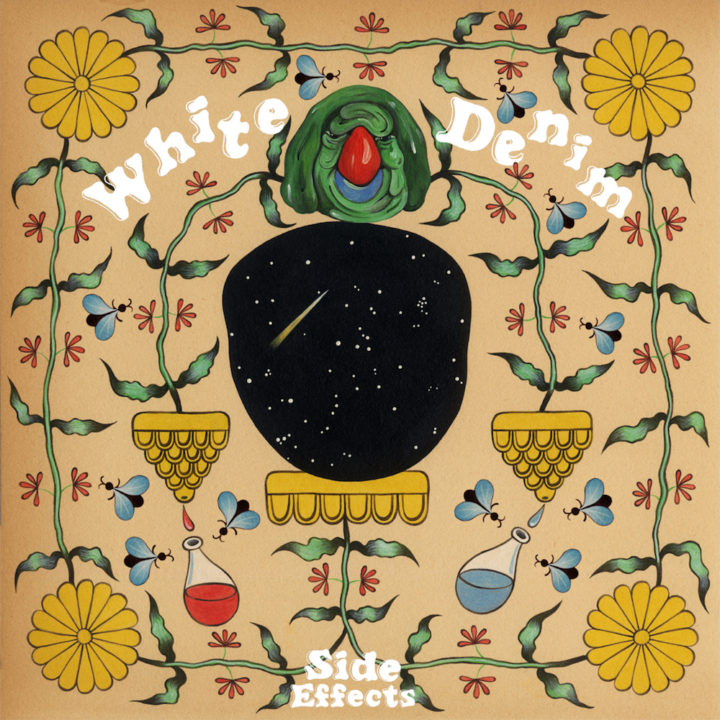 Less than a year after their last album Performance, the ever-prolific White Denim are back with their eighth record Side Effects. More in line with the experimental, freewheeling spirit of their fan-favourite record Last Day of Summer than anything else they’ve done since, Side Effects is a record that captures the essence of the band’s full-throttle live shows. Featuring a rotating cast of band members led by James Petralli and Steve Terebecki, these tracks draw on the sounds of different personnel to create a cohesive whole – the result being an album that’s as varied and vivacious as anything they’ve ever done.

“I keep a few CDs of demos and rough mixes in my car, and when the radio gets unbearable, I’ll put them on to see if I feel anything,” Petralli says on how Side Effects first found life. “The songs on Side Effects are ones I heard from these demos - they were the ideas that sounded the most developed to me. I had this feeling that just because these tracks weren’t the right fit for the previous records, doesn’t mean that they couldn’t go on to be great in the right context.”

With that in mind, Side Effects takes on a more incisive feel than previous White Denim records. Contrary to Performance - the story of a questioning performer on stage - Side Effects is the off-stage life of the man behind the makeup. Spearheaded by Petralli and Terebecki (who tag-teamed production and called in specific talents from their rolodex of musicians), Side Effects has the feeling of a band providing fan service in a way only White Denim could do – by referencing their own material and putting out a record for fans to dig deep into. “We don’t put any limitations on what the band could do or should do in the studio,” says Petralli.

The album’s opening track, ‘small talk (feeling control)’, barrels out of the gate with a garage-rock prowess not heard from the band since the days of Workout Holiday. Not only does it invoke nostalgia for the band’s early days, but its second verse is also from the first batch of lyrics Petralli ever wrote for the band. “When we made Workout Holiday, we captured a feeling that comes from having fun and playing music on the weekend. I’m always looking for that feeling in the room – to get everyone laughing and playing well. ‘small talk’ is a great example of that.”

‘Reversed Mirror’ meanwhile comes directly from the stage as another take on the live favourite. An expertly crafted instrumental, it’s a reworking of both ‘Mirrored in Reverse’ and ‘Mirrored and Reverse’ and perfectly captures the raw, improvisational nature of the live band. ‘Shanalala’ on the other hand sees them embracing a post-punk side in the vein of Suicide – all stuttering, off-kilter electronics and breakneck drum machines. It’s a track that beautifully captures the playful attitude of the album - a song that shows off one of the many outfits White Denim have in their wardrobe.

Then there’s the album’s centrepiece – the six-minute odyssey ‘NY Money’. It features the backbone of the current live incarnation of the band on record (Petralli, Terebecki, Michael Hunter – Keys, Greg Clifford – Drums) and effortlessly traverses through the sounds of Soft

Machine and Trans Am. “I cobbled the lyrics together from an old notebook I had on tour in 2015,” Petralli says. “It was after a night of drinking with The War on Drugs guys, and the Neu-influenced production at the back part of the tune is a winking homage to what they’ve been up to for the past few years.”

If you’re coming back to White Denim after a few years away, Side Effects most likely picks up exactly where you left off: a record showcasing a hugely energetic band bursting at the seams. And if you never checked out, then Side Effects is instead a wholly rewarding record – one that celebrates every form of White Denim to date and sets the stage for a brand-new chapter.