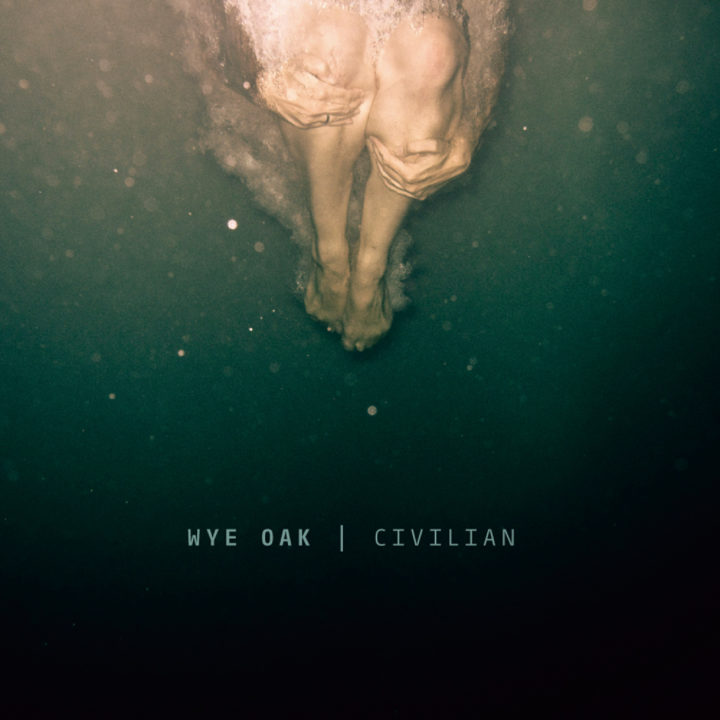 At peak moments in a Wye Oak show, something very important happens. Andy Stack will be in deep concentration, pulling off the uncanny magic trick of laying down propulsive bass lines on a keyboard with his left hand while firing off ingenious drum parts with his other three limbs.

And as singer-guitarist Jenn Wasner steps back a few feet from the mic, basks in the full blast of the amp, and peels off a soul-baring solo, a blissful smile crosses her face, as if someone has just whispered to her the most wonderful secret.

Maybe the secret lies in Wye Oak’s third album, Civilian. Jenn wrote the songs over the summer of 2010, when she was going through a difficult time. Don’t bother asking her about it—she won’t tell you, but if you’ve listened to the album, then she already has. “This album was completely a lifeline for me,” Jenn says. “I don’t know how I would have made it through without it. It’s pretty much all I did that summer—sit in my little room and write songs.” She came up with bleakly powerful confessions about the loneliness and uncertainty of change, then brought them to Andy, and together they worked their Wye Oak voodoo on them, fleshing out arrangements, adding keyboard parts and vocal harmonies, and creating billowing codas that blow you away each time you listen to them. Andy played most of the keyboards and bass, and they split guitar duties. “Andy’s a great guitar player,” Jenn says, “so sometimes I was like, ‘Here, you do it.’” In fact, the igneous twin solos on the title track are half Andy and half Jenn.

Civilian is a kind of 21st-century folk music, imbued with dense shoegaze guitars, nearly melodic rhythms, and impeccable splashes of electronic color. It’s deeply and yet transparently layered; listen to how all the different parts mesh on “The Alter.” There are fleeting glimpses of outside influences—the Cocteau Twins here, Sonic Youth there, moments of Crazy Horse or Fleetwood Mac—but Civilian manages the tantalizing feat of sounding familiar yet impossible to pin down. Maybe the references are more to the world than to music, as on “Fish” with its uncannily aqueous sound plumbing dark depths, and “Plains” with its towering mirages of sound.

And the songwriting is subtly radical. Listen carefully and you’ll realize that only one of the songs has a chorus, recalling something Mike Watt once said about the Minutemen’s music: “We don’t write songs, we write rivers.” Without leaning on conventional structure, the songs beguile with fascinating chords and melodies, Jenn’s voice and riveting lyrics, mesmerizing rhythms, and an intoxicating aural landscape. Just as good writing has meaning between the lines, Civilian has meaning between the sounds: the combinations of harmonies, timbres, and words summon vivid and ineffable associations just beyond reach.

While their debut album If Children was about the bonds of family, and its followup, The Knot, was about bonds with everyone else, Civilian is about bonds breaking and powerful energies being released. “This is the most emotionally direct set of songs that I’ve heard Jenn write,” Andy says. “I think she’s a little uncomfortable with that, but it sure is nice for anyone who listens to them.” Although the lyrics are unflinchingly personal, they’re shrouded in double-tracking and harmonies, submerged in the mix, and sometimes oddly phrased—almost smudging over their meanings. “These songs contain fragile information,” Jenn explains. “It’s a tightrope for me. It’s the only way to make songs that are so intensely personal.”

After recording and mixing the previous two albums themselves, Wye Oak brought in mixing engineer John Congleton (St. Vincent, Shearwater), who played a pivotal role in the sound of Civilian. “JC definitely pushed us into some exciting and sometimes scary new territory,” Andy says. “It was the most that Jenn and I had ever relinquished control of our music to someone else, but it gave us a chance to step back and see the big picture, whereas on previous recordings we got embroiled in the technical details.”

The songs on Civilian ring so true, it’s not surprising that there’s a story behind each one. The night Alex Chilton died, Jenn and Andy (born more than a decade after Big Star fell apart) played an emotional “Take Care” to close their SXSW show. That night, Jenn wrote the album opener “Two Small Deaths” in an Austin hotel room after hearing the news that a distant relative had been murdered. “Both were people who I had no personal connection with,” she says. “They were just distant people who had touched lives that I was close to.” It’s interesting, then, that a Chiltonesque acoustic ballad, “Doubt,” closes the album. “When I finished writing that song, I ran downstairs to my roommates, ecstatic because I knew I’d written the last track of the album,” Jenn says. “And I wasn’t depressed anymore. Songs are magic—they’re like sorcery. I was back to normal, or whatever version of normal I can be. I can’t afford therapy, but I sure have written a lot of songs.”

Civilian embodies one of music’s most amazing qualities: the paradox of going through a devastating experience, then not only summoning the strength to write about it, but making sense of it, creating something incredibly beautiful. As Jenn sings in “Plains”: “Try to remember, pen to the paper, portion it out, what’s it about.” All the hurt in the lyrics, all the ache in Jenn’s voice, is transcended through the anodyne powers of the music itself. So I know what that little voice is saying to make Jenn Wasner smile. It’s saying, “Don’t worry. I will save you.” And it can save you too.