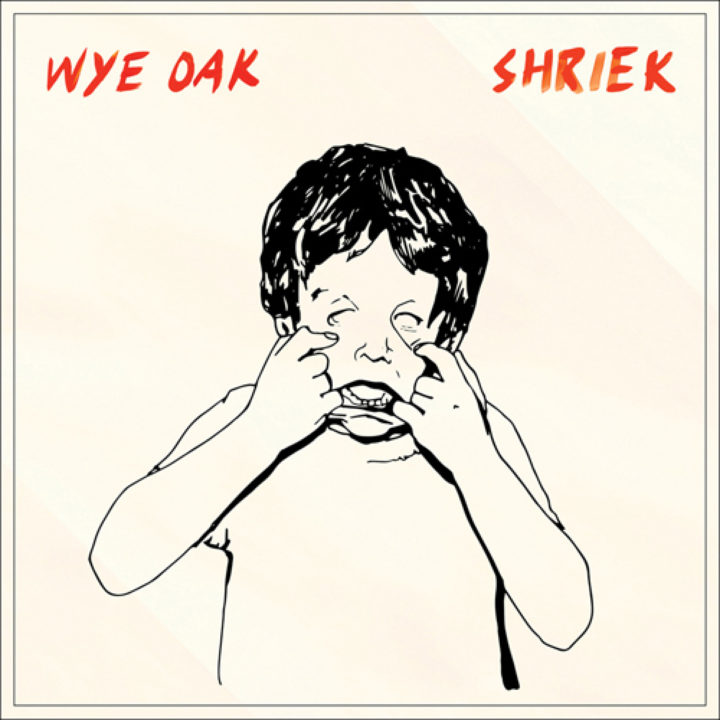 Jenn Wasner and Andy Stack of Wye Oak have spent most of their lives in Baltimore, Maryland. But after two years of constant touring with Civilian, their highly lauded 2011 album, they landed on opposite sides of the country with an unforeseeable future ahead. Despite this newfound uncertainty, the two bandmates embraced their physical distance, passing ideas back and forth, allowing new work to evolve in their respective solitudes. Shriek is Wye Oak’s fourth full-length and the culmination of their intent to express the emotional and intuitive self by acting out animalistic exclamations through cathartic release. It is their most personal and confident declaration yet.

Newly inspired by playing bass, Jenn took up songwriting in a setting where the guitar did not dictate harmonic boundaries or require a call-and-response relationship with her voice, a hallmark of previous Wye Oak records. With her phrasing freed, now it is often Andy who interacts with Jenn’s vocals, playing syncopated and meditative keyboard parts, and the duo’s collaborative arrangements provide a backdrop in which both the arcs of melodies and the new rhythmic elements flourish. Here there is a new clarity in Jenn’s voice and a fervent resoluteness in Andy’s feel, and gone are the distorted guitar swells—in their stead are patterns, like mantras, of layered pianos and synths that meld the roles, and various instruments, of both players.

To engineer, mix, and co-produce, they brought in Nicolas Vernhes of the Rare Book Room in Greenpoint, Brooklyn, whose inventive and forward-thinking approaches to production complemented their new direction. The result is a record of indisputable humanity. Shriek is a complete narrative of disorientation, loss, renewal, and empowerment. In the beginning, “Before” serves as a sonic bridge between Civilian andShriek, and a capsule of the harried moments of movement and travel, of documents with no memories. Treading deeply, “The Tower” is an indictment of the burden of expectations—and if there is any evidence of the years Jenn and Andy have played together, it can be heard in the way their bass and drums dance around each other as if they are shrugging off a great weight. Just when it becomes necessary to break open, “Glory” cries out for the need to abandon inhibitions in the face of desire.

But the emotional core of Shriek is the stunning ballad “I Know the Law,” where Jenn, in the act of purging her own feelings of helplessness, and in the face of a myth constructed out of the needs of others, writes and sings here with a touch of the divine. It resonates with a universal understanding of the solemnity of life but also with the empowerment of someone who has put her own personal cosmos in order.

Wye Oak is immense. Like their thunderous live shows, in which they build up love, terror, and loss in one moment and then tear them down in the next, they have created a record that explores the personal struggle for peace—but within the instinctive, unconscious mind. If Civilian was the album that made mountains surge, oceans swell, and desert high plains ever more vast, then Shriek is the album that sounds the infinite depths of our inner space.