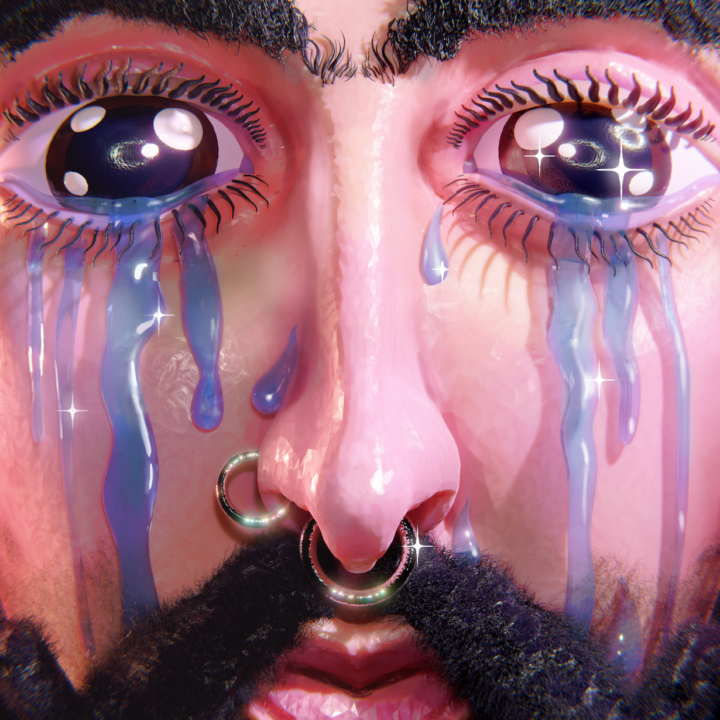 Zouj is the project of multi-instrumentalist and producer Adam Abdelkader Lenox. After releasing his acclaimed mixtape Tagat last year, the follow-up Metal will drop on 23th September 2022 via City Slang. On his record, Zouj creates a hyperpop cosmos full of experimental and futuristic sounds that lose none of their catchiness. Both EPs will be released combined on vinyl.

Zouj spent his late teens and early twenties in Leipzig, mainly on tour with his hardcore bands, like his most recent group Lingua Nada. That meant cheap rent and lots of time to devote to music and being constantly on the road. Just like Björk decided at some point that it was time to stop living the punk life of the Sugarcubes, Zouj also broke away from the group and turned from guitar music to an experimental, electronic sound. "After four years with my band, punk rock and basements, I wanted to do something different. At first I thought I'd open a bar, but then it became a mixtape. " Metal marks the release of the second EP from his solo project. A professional bassist, Adam Abdelkader Lenox also recently toured in the live band of Antilopen Gang and performed with Zouj as a support act for ÄTNA.

What if Earth, Wind and Fire's "September" wasn't a call to remember a sexy and romantic late summer - but to please delete all the accumulated data on one’s social media channels after death? Paired with a funky bassline and the spacey electronica sound of Daft Punk radio hits, we're getting closer to Zouj's "Delete After Death”, as he raises a question that should definitely be considered in times of all-encompassing digitalization: what happens to all my data when I die? "Move all my data to the bin. Cause I wanna be forgotten." And is there a right to a digital death? "Online I discovered a tattoo store called ‘Delete After Death’ and thought to myself, that's smart. Delete what? Sure, all the data. And then I looked at my Facebook profile again and thought, ‘Bad.’"

"Driving With My Eyes Closed" was created in collaboration with multi-instrumentalist, rapper, singer and dancer Sahareya. Both artists met at an art residency in Vienna and the Ljubliana artist is now a permanent part of the Zouj live band. "The song is a reminder that no one has a plan of what exactly you are doing here. Not your parents, not your grandparents. But everybody's still doing their best." Fluid sounds like synthetic water run through the song. A bass hits. And Sahareya's rap part is accompanied by beats reminiscent of Missy Elliott’s "Get Your Freak On".

Zouj's songs create a sonic world that sound both strangely menacing and danceable at the same - dystopian sounds that fit equally in a glitchy video game or adult cartoon as well as in a club. "With 'Driving With My Eyes Closed,' I wanted to find out what rubber might sound like. There's a lot of bass paired with jumpy synths. Everything sounds a little 'wobbly'." But Zouj's sound also feeds off an interest in the dark and weirder corners of the internet, from which he draws ideas: "Sometimes I just think of dank memes."

"Metal", the title track of the album, was born from the idea of creating a song that would sound like a robot. The process was all about approaching metallic sounds. "The EP is full of such hints," says Zouj. At the same time, accompanied by vocoder-distorted vocals and crooked guitars, the track unfolds as a gentle anthem of love. “Metal” becomes a metaphor of inner walls raised: "Armed to my teeth. Under my shields I ́m mortal. For your not to see the scar, I’m aiming for the heart first." Until the willingness to take off one's inner armor sets in. With "Anxious Sleep (Deep Dream Edit)," Zouj follows up his single of the same name from last year, which revolved around the state of sleep paralysis. "Sugar" and "Haram (Club Edit)" follow, two instrumentals that catapult the artist's sound into the setting of a club. In their original version, they ran as a soundtrack in a Nike campaign: For fashion designer All Amin aka Haramwithsugar's collaboration with Nike, Zouj provided the music for the fashion spot. "Bad News," on the other hand, approaches the '00s R'n'B sound of a Justin Timberlake - stripped down and put together in a much darker, futuristic style. While the lyrics take the oppressive feeling that a big city leaves behind to the extreme: "Oh man I'm so tired these days, I'm so tired. Dear god have you left the chat. There's only concrete looking over me. "

Throughout the music video for "One! " (produced by Julie Amouzegar Kim), a 3D avatar of the artist navigates through animated worlds that flicker with a melancholy for the early '00s era of video games. The character's journey to find perfect unity with himself fails: "Duality lives in all of us. Aren't we all always somewhere in between? And sometimes it's interesting to take a step back and let an avatar fight that out in a video." Zouj's visuals are characterized by the creative collaboration with artists from his environment. The cover is by Hamburg-based illustrator and animator Raman Djafari, who most recently animated a music video for Dua Lipa and Elton John. "I like to try different avatars of myself by different artists. By now, I have a collection of seven."

Metal EP feels like veering off the rainbow track in Mario Kart and suddenly glitching into the creepy mansion route. Wry synthetic sounds break out of the traditional song structure of pop, carving their own paths, yet ultimately never straying from catchiness. "I think the music doesn't want to be pop. Or it does want to be." Zouj's world is surreal and glitchy, experimental and glowing like a screen. Catchy and challenging. And, above all, fun as hell.